Court grants limited adoption rights to gay and lesbian couples, setting a precedent for similar cases in the country.

Colombia has taken a major step in recognizing the rights of same-sex couples, after the country’s leading court granted limited adoption rights to gay and lesbian couples. 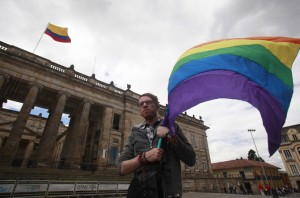 The Constitutional Court ruled on Thursday that a lesbian woman,could adopt her long-time partner’s daughter, since the child in question was the biological child of one of the two partners.

The court said Ana Leiderman, who underwent artificial insemination to conceive her daughter, and raised her with Veronica Botero, had the right to request an adoption by her partner regardless of sex.

“The court considered that the discriminatory criterion the administrative authority had used to deny the adoption procedure … was unacceptable in this case, which involves a consensual adoption in which the biological father or mother consents to an adoption by his or her permanent partner,” magistrate Luis Ernesto Vargas said.

However, the ruling does not not allow gay couples to adopt if neither person is the child’s biological parent, and even couples covered by the ruling will have to meet certain conditions, such as having lived together for at least two years.

But legal experts said it could indicate a willingness by the high court to extend adoption rights to all same-sex couples, and sets a precedent for all similar cases in the South American country.

The verdict comes after a number of gay-friendly rulings in Colombia and other parts of Latin America.

The decision also comes on the heels of Cecilia Alvarez, the commerce minister, speaking publicly about her lesbian relationship with fellow cabinet member Gina Parody.

During an interview on local radio station RCN, Alvarez dismissed a question on the implications of having a lesbian couple in President Juan Manuel Santos’s government.

“I give thanks to the president because he has never, ever gotten involved in personal issues. Instead he has seen our professional qualities,” Alvarez said.