Former US secretary of state says in new memoir that she was convinced arming moderate fighters was the best move.

Hillary Clinton favoured arming Syria’s rebels early in that country’s civil war but was overruled by President Barack Obama, the former secretary of state said in her new memoir. 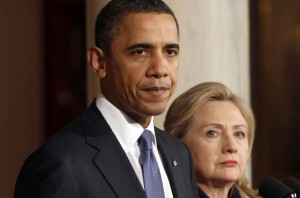 Clinton’s long-awaited book “Hard Choices” – seen as an unofficial start to her expected presidential run – is set for a June 10 release.

“Wicked problems rarely have a right answer; in fact, part of what makes them wicked is that every option appears worse than the next. Increasingly that’s how Syria appeared,” she wrote in the memoir, obtained by CBS News.

Clinton said that she returned to Washington from an overseas trip convinced that arming and training moderate Syrian rebels was the best move to turn the tide against strongman Bashar al-Assad.

“The risks of both action and inaction were high, [but] the president’s inclination was to stay the present course and not take the significant further step of arming rebels,” she added.

“No one likes to lose a debate, including me. But this was the president’s call and I respected his deliberations and decision,” she wrote, according to CBS News.

CBS Corporation is the parent company of Simon & Schuster, which is publishing Hard Choices, which chronicles Clinton’s four years as secretary of state under Obama.

It promises to provide a treasure trove of details about her tenure, and Clinton launches a busy book tour beginning next week that is widely being interpreted as a dry run for the 2016 presidential race.

The book touches on scores of key policy issues including the Iraq war, Benghazi, Washington’s ties with the Kremlin and Russia’s invasion of neighbour Ukraine, as well as fallout from the Arab Spring.

But the Syria episode illustrates a key break between Clinton, who is mulling new presidential bid after losing the Democratic nomination to Obama in 2008, and a president whose popularity has fallen.

“From the beginning of our partnership, he had promised me that I would always get a fair hearing. And I always did. In this case, my position didn’t prevail,” she wrote.

Clinton also revealed details about a first, secret meeting with newly-minted nominee Obama prior to the 2008 Democratic convention, during which the two “stared at each other like two teenagers on an awkward first date”.

“Both Barack and I and our staffs had long lists of grievances. It was time to clear the air,” she wrote.

She also wrote about how she eventually realised that her vote supporting the Iraq war resolution in 2002 when she was a US senator was a grave mistake.

“I thought I had acted in good faith and made the best decision I could with the information I had. And I wasn’t alone in getting it wrong,” she wrote.

“But I still got it wrong. Plain and simple.”