Spaniards Rafael Nadal and David Ferrer ease into the third round at Roland Garros after straight sets victories. 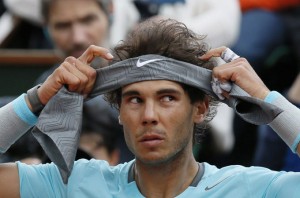 The eight-time champion from Spain applauded his 20-year-old opponent after being tested on court Philippe Chatrier more than the scoreline suggested.

“His ball is so high he was able to hit strong he has completely everything to become a champion,” said the world number one.

He briefly was in the third set when Thiem, who stunned world number three Stan Wawrinka in the second round of the Madrid Masters this month, broke and held serve to open a 3-1 lead.

His booming inside-out forehands briefly put Nadal in trouble as the Spaniard eyeballed his opponent.

But Nadal won the remaining games, ending the contest on his second match point when the Austrian sent a forehand long.

Nadal, who next faces Russian Teymuraz Gabashvili or Argentine Leonardo Mayer, is on a quarter-final collision course with last year’s runner-up and compatriot David Ferrer.

“I am ready for the next round and was very happy with my performance, especially with my consistency,” he said.

“My season on clay has been good (when asked about beating Nadal on clay this season). I have a good feel but I’m focusing on the moment.”

Elsewhere, Croatian 16th seed Ivo Karlovic reached the third round with a 7-5 6-3 6-4 win over Andreas Haider-Maurer.

Sixth seed Jelena Jankovic proved strong on serve to hold off Japanese Kurumi Nara, who collapsed in the second set in a 7-5 6-0 defeat by the Serbian who is a three-times semi-finalist in Paris.

In the absence of the Williams sisters, 15th seed Sloane Stephens raised American morale by easing past Slovenian Polona Hercog 6-1 6-3 to reach the third round.