A Syrian delegation to Beijing has urged China to play the role of neutral peacemaker, to aid the end of the Syrian crisis 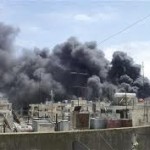 The Syrian crisis should be resolved through dialogue rather than foreign intervention, and China is welcome to play a more constructive role as a neutral peacemaker, the head of a visiting Syrian delegation said in Beijing on Sunday.

Berwin Ibrahim, secretary-general of Syria’s National Youth Party for Justice and Development, is leading a six-member delegation, the All-Nation Union for Dialogue, on a weeklong visit to Beijing.

The All-Nation Union for Dialogue comprises representatives of opposition organisations in Syria along with pro-government figures.

The delegation arrived in China on Thursday, two days after US President asked Congress to delay a vote on military strikes on Syria pending negotiations on the war-torn nation’s chemical weapons arsenal.

“As an opposition party, we don’t agree with the government, and we call for reforms,” Ibrahim told China Daily. “But we also are opposed to other countries swooping in with military intervention, telling us to overthrow the Assad regime.”

Ibrahim distinguishes her party from other opposition organisations based outside Syria and terrorist groups within Syria, adding that certain countries have used both to try to topple the current government.

“The opposition outside Syria is a creation of the US and of other countries. No Syrian citizen accepts that in their country,” she said.

The United States accused Syrian President Bashar al-Assad’s government of being behind the August 21 chemical weapons attack on the outskirts of Damascus. The Obama administration says the attack killed 1,429 people, while other estimates put the figure much lower.

Assad has denied responsibility for the incident and accuses the Obama administration of spreading lies without providing evidence.

Ibrahim also denied that the Syrian government used chemical weapons on civilians in August, saying the atrocity was perpetrated by groups allied to the Free Syrian Army and was later used by the US as a justification for military intervention.

“It does not make sense to say the Syrian government used sarin gas to kill more than 1,000 people near Damascus just one day after the UN investigators arrived,” Ibrahim said.

“Also, investigations revealed that the dead were mostly children abducted from northern Syria by armed terrorist groups,” she added. “We have every reason to believe that they did it.”

The National Youth Party for Justice and Development operates within the framework of constitutional reform undertaken last year that allows for a multiparty system in Syria. The party aims to strengthen the role of youth in political reform, economic and social development.

The delegation, at the invitation of the Chinese People’s Institute of Foreign Affairs, met Chinese Vice-Minister of Foreign Affairs Zhai Jun on Thursday and held talks with researchers and students of Middle East studies.

“The purpose of this visit is to inform the Chinese side of what is truly happening in Syria and of our concerns that Syria might become another Afghanistan or Libya if the current crisis continues to ferment,” Ibrahim said.

The union appreciates China’s fair and just position on the Syrian issue and will continue to lobby against foreign interventions and strive for an inclusive, nationwide dialogue, Ibrahim said.

Ahead of China, the delegation has already paid a visit to Iran, and will also travel to Egypt, Russia and Iraq to canvass for assistance and solutions.

“As a big country and a permanent member of the United Nations Security Council, China has been consistent and constructive on its Syria policy, not picking sides. We would like a neutral country such as China to play a bigger role in mediating the conflict,” Ibrahim said.

“China’s weight is the same as the US. By vetoing resolutions regarding Syria in the Security Council, China helps to maintain the balance of power in the Middle East.” (Sources; China Daily)