BEIJING: China said on Saturday that it will work with Afghanistan to fight terrorism, after it blamed a deadly train station attack on extremists from its western Xinjiang region, which shares a short border with the war-torn nation. Beijing has become increasingly concerned about security in restive Xinjiang, where it says Muslim extremists receive help from militants in neighboring countries. China 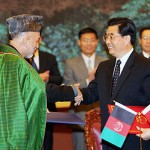 says separatists from the region, home to a large Muslim Uighur minority, launched a terrorist attack in the southwestern city of Kunming last week, killing at least 29 people and injuring about 140.

China will work with the international community for political reconciliation in Afghanistan and support reconstruction, Foreign Minister Wang Yi said at a press briefing during an annual session of China’s largely rubber-stamp parliament. “We will also work with Afghanistan and other neighbors to resolutely fight all terrorist forces,” he said. China will host a foreign ministerial conference on Afghanistan in August to encourage “a move toward lasting peace”, Wang said. Wang last month visited Afghanistan as U.S. and allied troops prepare to draw down their forces after more than 12 years of fighting Taliban extremists. China has been stepping up its engagement with other regional players in recent months in Afghanistan, Beijing-based diplomats say, mainly out of concern that the NATO-led force’s pullout may spawn instability that could spill into Xinjiang.

Many Uighurs in the energy-rich region, which borders ex-Soviet Central Asia, Afghanistan, Pakistan and India, chafe at Chinese restrictions on their culture and religion. More than 100 people there have been killed in unrest in the past year, according to Chinese state media reports. China bristles at suggestions from exiles and rights groups that the violence is driven more by unhappiness at government policies than by any serious threat from extremist groups who want to establish an independent state called East Turkestan. Experts say militant ideology does in part fuel the unrest, but the level of organization has long been disputed.