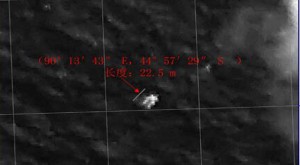 “The news that I just received is that the Chinese ambassador received satellite image of floating objects in the southern corridor and they will be sending ships to verify,” Hishammuddin told a news briefing in Kuala Lumpur.

It was not immediately clear how many possible objects had been spotted, but the minister said one was estimated at 22.5 meters by 13 meters.

“The Beijing government will announce this in a couple of hours,” he added.

The news came as Hishammuddin was in the middle of his daily press briefing on the search for MH370.

“This is coming to me as quick as you are seeing on TV right now,” the minister said, adding that he was wrapping up the briefing early in order “to follow this lead”. (AFP)