Australian property has long been a popular choice for Chinese investors but investments appear to have sped up in the past year as Beijing’s crackdown on corruption has gathered momentum.

“For the first time, China was the largest source of proposed foreign investment in Australia, mainly driven by a large increase in residential real estate approvals,” the report said.

The new report followed the Australian government’s move in February to enforce foreign investment rules as concerns grow that foreign buyers are squeezing local house seekers out of the market.

China received approvals to invest A$27.65 billion ($22.08 billion) in Australia, with almost half going into real estate, according to the 2013/14 annual report of the Foreign Investment Review Board, which oversees international investment.

“It is expected that the Australian dollar will go down a little bit further, and that will make it more attractive for Chinese investors to invest more in real estate.”

The Asian economic giant’s spending in Australia for the year ending June 30, 2014 far outstripped the Aus$17.5 billion from the United States — which was the biggest investor for more than a decade — and Canada’s Aus$15.4 billion, the Foreign Investment Review Board (FIRB) said in its annual report.

“Demand from Chinese and Asian investors into Australian real estate will keep growing,” said Matthew Tiller, a national research manager at real estate agency LJ Hooker. “It is expected that the Australian dollar will go down a little bit further, and that will make it more attractive for Chinese investors to invest more in real estate.”

Property prices, particularly in Sydney, Australia’s most populous city, have been climbing, fuelled by record low interest rates, strong investor appetite and limited supply of housing stock after years of underinvestment. Sydney house prices have jumped 15 per cent in the past 12 months, compared with a five-year return of 6.6 per cent, according to property monitoring group CoreLogic. 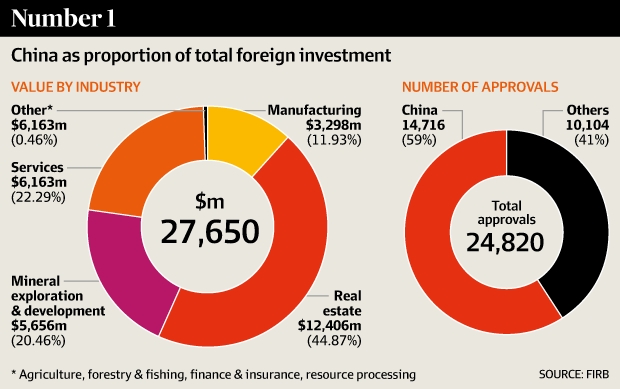 The FIRB figures tally approved investment rather than actual investment and may understate US investment due the higher threshold that exists for US investment compared with China under the existing trade rules. While China has topped the US for annual approvals, the US, Great Britain and Japan still have greater accumulated investment in Australia than China.

The statistics did not give a breakdown of the residential investments by country but did reveal the number and value of property transactions almost doubled from 11,668 transaction to 23,054 in 2013-14.

China is already Australia’s largest trading partner, with the nation’s key mining sector dependent on its Asian neighbour’s demand for resources.China’s total investment in Australia for 2012-13 was at Aus$15.8 billion, which had made it the third-largest investor behind the US and Switzerland, with the European nation’s spending driven by a Aus$15.8 billion splurge in mining.
Australia Business China US