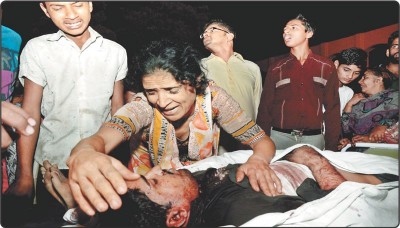 Pakistanis on Monday mourn the deaths of 66 children, women and men killed during a terrorist attack in Lahore city on Sunday evening. Tragic scene was witnessed today in several areas of Lahore when relatives of those killed carried out last burial ceremonies to say final good bye to their loved ones.

Meanwhile two terrorists self-style spokesmen speaking from Afghanistan claimed responsibility of the attacks but it was not clear which group is in fact responsible for the bloodbath against innocent civilians. Five soldiers from Pakistan Rangers stationed in the area were also killed but most of those who became victim of November 2nd terror attack were local residents of Lahore or families who were returning after attending the Wagah border ceremony held daily at Pakistan-India border check point.

Several politicians and some senior security officials expressed their fear of possible involvement of foreign elements. Some of them pointed out to repeated warnings by India to ‘teach a lesson to Pakistan” following last months border clashes. But others feared the role of terrorists based in Afghanistan. Both the represented who made calls to claimed the responsibilities came from Afghanistan.