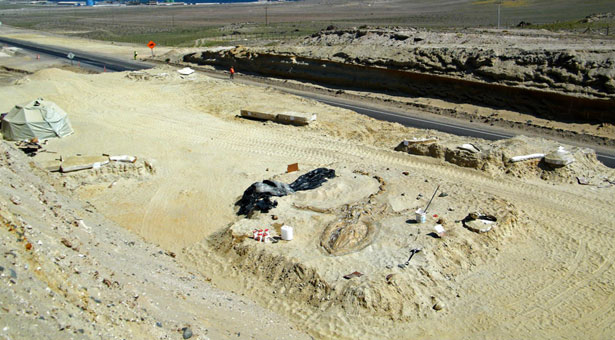 The study by a team of Chilean and Smithsonian Institution scientists was published Wednesday in the British journal Proceedings of the Royal Society B.

The experts traveled to Chile´s Atacama region in 2011 to unearth one of the world´s best-preserved graveyards of prehistoric whales. Their findings help solve a mystery about how dozens of whales and other marine mammals congregating off South America´s Pacific Coast died only to emerge again atop a desert hill over a half mile from the surf.

“There are hundreds of whale skeletons yet to be found,” said Nick Pyenson, curator of fossil marine mammals at the Smithsonian´s National Museum of Natural History. “This is a site on par with Dinosaur National Monument here in the United States, a whole hillside littered with dinosaur skeletons. We seem to have the same thing except with whales here in Chile.”

The remains were first found by construction workers in 2010 during the widening of the Pan American Highway, or Route 5, which is Chile´s main north-south road. Other unusual creatures found at the “Cerro Ballena,” or Whale Hill, site include an extinct aquatic sloth and a walrus-like toothed whale.

Scientists say the skeletons show the animals were poisoned by toxins some 5 million to 11 million years ago and “died at sea, prior to burial on a tidal flat.”

“Based on the orientation of the skeletons and other information, these whales likely died from harmful algae blooms, which we know in the modern world can be a killer,” Pyenson said.

Algae blooms can create poisons that can be ingested or inhaled causing organ failure in marine mammals. Blooms are common along coasts and are enriched by nutrients like iron carried by rivers into the ocean.

“The key for us was its repetitive nature at Cerro Ballena,” Pyenson said. “No other plausible explanation in the modern world would be recurring, except for toxic algae, which can recur if the conditions are right.”

With funding from the National Geographic Society, the Smithsonian team used sophisticated photography and laser scanners to create an online archive of 3-D images of the whales and they made life-size models before the site was covered by the highway. The fossils themselves were put in museums in Santiago and the northern Chilean city of Caldera.