Hundreds of children living rough in London and other cities may have no nationality, the BBC has found. 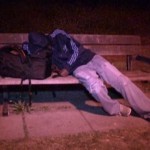 Inside Out London has uncovered stories of children who according to official records do not exist – some forced into sex work to eat. Further research by the BBC suggests it is a UK-wide problem.

“The problems caused by statelessness are by no means limited to London,” Chris Nash, of charity Asylum Aid, said. Though, he acknowledges it is in the capital that the problem is most acute.

Many of London’s stateless youths came to the UK legally, but were never officially registered. They cannot access education or apply for social housing.

And according to two respected youth charities contacted by the BBC, there are “hundreds” of them in the city.

Both Coram Children’s Legal Centre and Peckham Project Safe ‘n’ Sound are calling for increased awareness of the problem. Safe ‘n’ Sound’s Jennifer Blake said: “To date, we’ve been approached by over 600 young people. It is a big issue.”

Ms Blake attempts to try to get the children off the streets and into safe shelter as quickly as possible. She has been trying to find a room for Ugandan-born Tony, 17, who has been sleeping on buses since his father kicked him out while living in the UK.

Tony said: “It is a struggle. If you are hungry you need money. “But if I steal I end up going in prison and that’s not me, I don’t want that.” After two years of living on the streets and struggling to find food and shelter, Tony’s health is deteriorating.

He said: “This year when the cold came it really had me – I was coughing, sneezing. I got it badly. “I’ve got a lot skinnier because of the problems I’ve been having.”

Some stateless children are as young as 14. With no support, shelter or care, they are increasingly turning to crime to survive.

And for teenagers like Tony, attempting to become a legal citizen retrospectively can be virtually impossible. No longer in contact with their families, they struggle to prove their identity to immigration officials.

Some girls are being reduced to sexual exploitation. One 17-year-old, who was smuggled out of Libya in 2009, also has no country to call home.

Worried about the military violence in the country, her mother paid a friend to look after her in the UK. But within months she was abandoned by her guardian.

She told the BBC: “I just ended up living on the streets. “Sometimes I feel like killing myself. “I have to do things that make me sick and ashamed just for a few pounds, sometimes even pennies – just so I can eat or get somewhere to sleep for one night.”

According to the Oxford University Centre on Migration Policy and Society, London and Birmingham are the major hotspots for statelessness.

The organisation spoke to 53 “irregular migrant” children and parents in the two cities, from countries including Afghanistan, Brazil, China, Jamaica, Nigeria, Iran, Iraq and the Kurdish region of Turkey.

But there are no concrete figures for the number of stateless children – precisely because they are stateless. And some local authorities may not always be acting within the law or good practice guidance.

The BBC has heard suggestions councils are trying to assess children to be older than they are so they can avoid being responsible for them.

Amara Ahmad, of solicitors Fisher Meredith, says she is acting for several children taking legal action against councils for this reason. And Coram also said it was aware of the ploy. Neither organisation would disclose the specific councils alleged to be at fault.

Kamena Dorling, of Coram Children’s Legal Centre, said: “If you are a child in the UK, regardless of immigration status the local authority has a legal duty – they should be looking after you. “They should be providing you with support and accommodation and often this doesn’t happen.”

Since the BBC’s investigation, Safe ‘n’ Sound has managed to secure Tony’s immigration status and he now has the right to reside in the UK. He is still homeless.

BBC Inside Out is on BBC One in the London region on Monday, 5 November at 19:30 GMT and nationwide on the iPlayer for seven days