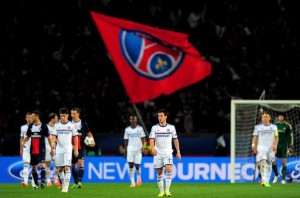 Paris Saint-Germain took advantage of sloppy defending to beat Chelsea 3-1 in the first leg of their Champions League quarter-final.

Chelsea did well to contain Zlatan Ibrahimovic, PSG’s top scorer with more than 40 goals this season. But Jose Mourinho’s team was undone by lapses from captain John Terry and midfielder David Luiz, who gave the ball away leading up to the opening goal.

That came in the fourth minute when Ezequiel Lavezzi twisted to sweep the ball home after Terry’s poor headed clearance. After Eden Hazard had equalised from the penalty spot midway through the first half, PSG went ahead again in the 61st as Luiz shinned the ball into his own net.

Javier Pastore added the third late in injury time to leave Chelsea with a mountain to climb in the return-leg.

In the other match, Cristiano Ronaldo scored a record-equaling goal before exiting to an apparent injury as Real Madrid beat Borussia Dortmund 3-0 to take a big step toward the Champions League semi-finals.

Ronaldo netted his 14th goal of the season in Europe’s top competition to give Madrid a clear advantage ahead of next week’s return-leg in Germany. But it came at a price as the Portugal forward came off in the 80th minute with a leg problem.

Gareth Bale scored early and Isco added another before the half hour mark at the Santiago Bernabeu Stadium.