Jerusalem — The funeral for a Palestinian teenager murdered this week in an apparent revenge attack came to a chaotic end on Friday, as mourners clashed with police and his shrouded body was hurried away from a bombardment of Israeli tear gas. 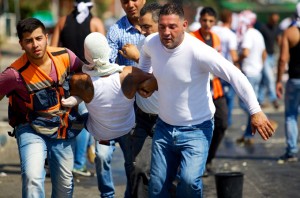 Mohammed Abu Khdair was kidnapped outside his family home on Wednesday morning, and his charred body was found in a Jerusalem forest hours later.

Police will not comment on the investigation, but it is widely believed that his murder was an act of revenge for the killing of three Jewish teenagers, whose bodies were found near Hebron earlier this week.

After two days of forensic tests and delays, Abu Khdair’s body was unceremoniously unloaded from an ambulance in the middle of the street. Mourners carried it inside the neighbourhood mosque, steps from where he was abducted.

“This is no way to bury a martyr,” said Samir Abu Saleh, waiting outside the mosque. “He should have been buried two days ago. To do it like this is unacceptable.”

A funeral procession of more than a thousand then set out for the cemetery. Dozens of local youths began throwing rocks and firecrackers at Israeli border police, who were stationed at the exit of the neighbourhood.

As police responded with tear gas and rubber-coated bullets, the main procession broke off to bury Abu Khdair.

The clashes dragged on for several hours.

It was the third consecutive day of violence in East Jerusalem – the worst in many years, according to residents.

Businesses have been mostly closed since Wednesday, and the municipal light rail has been trashed, with stations destroyed and tracks damaged. Officials say it could take months to repair.

Fighting broke out in several other parts of Jerusalem as well. Police barred most Palestinian men from attending Friday prayers at Al-Aqsa mosque, turning away those under the age of 50.

A total of 73 people were injured on Friday, most of them in Shuafat, the Palestinian Red Crescen.

A gag order prevents Israeli media from reporting on many details of Abu Khdair’s murder. Some journalists have speculated, with no evidence, that the killing was a family dispute. One right-wing outlet suggested that he was murdered by his family for being homosexual.

But the police themselves have told local journalists that they believe the killers were Jews, taking revenge for the murder of the three settlers—Eyal Yifrach, Gilad Shaer and Naftali Frenkel—who were kidnapped on June 12 and found dead on Monday.

Channel 10 reported on Thursday night, before the gag order was imposed, that the car used to kidnap Abu Khdair was the same one used in an attempted abduction of another Palestinian one day earlier. His family told Al Jazeera on Thursday that there was evidence proving his murder was a revenge attack.

The murder in Shuafat, while the most brutal, is one of many attacks on Palestinians since Monday. A growing number of videos posted on social media show assaults across the country: In one, posted on Wednesday, a passenger on a bus tries to attack a Palestinian, then assaults the soldiers who try to defend him.

Online campaigns calling for “revenge” have garnered thousands of supporters. Prime Minister Benjamin Netanyahu has called on Israelis not to take the law into their own hands, but he himself spoke of “vengeance” in a statement issued on Monday night.

Separately, the Israeli army sent reinforcements to the border with the Gaza Strip on Thursday, amid intensifying rocket fire on southern Israel. The deployment came after 11 Palestinians were wounded in Israeli air raids on Gaza.

Netanyahu said the reinforcements were “preparing for the possibility” of forceful action.

Local media reported on Friday that Israel had given Hamas a 48-hour ultimatum to stop the rocket fire.