The Australian Government is partnering with Facebook and two youth not-for-profit groups, headspace and PROJECT ROCKIT, to take a stand against cyber bullying through the Be Bold, Speak Up campaign. 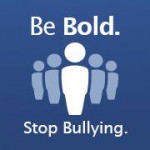 Bullying is a real issue for everyone – for parents, teachers and kids. 2009 research by the Edith Cowan University gave us a staggering statistic: one in six students are bullied weekly. They also found one in five students has experienced some form of cyber-bullying.

Bullying no longer takes place in dark corners behind school buildings or at the bus stop. It’s happening online for the world to see, and it’s happening now.

We want to ensure every child has a positive and meaningful experience at school, and this means getting everyone involved. We must work together as a community to put an end to bullying.
The campaign was officially launched at Matraville Sports High School in Sydney today by Minister for School Education, Early Childhood and Youth, Peter Garrett, Minister for Mental Health, Mark Butler, representatives from headspace and PROJECT ROCKIT and ambassador Ruby Rose.

A video message from Prime Minister Julia Gillard was played at the event.
Facebook users can make a personal commitment to stop bullying by downloading the Social Pledge App.
The App is about saying ‘I will not tolerate bullying.’ It also enables parents and kids to recruit others to join the campaign.

We hope many of the 11 million Australian Facebook users will make the pledge, by the next National Day of Action Against Bullying and Violence on 15 March 2013.
This Government has been taking a stand against bullying – this includes equipping school communities with resources so they all have positive and pro-active safe school policies in place.
We held the first ever national anti-bullying forum earlier this year to bring together teachers, parents and young people to work out what more can be done.

We committed $4 million to develop new online toolkits to help parents, teachers, and students deal with school bullying. They include resources for parents, teachers and school support staff, well as equipping graduate teachers with the knowledge and skills when they first enter the classroom.
As part of the National Plan for School Improvement, we want every school in the country to have a safe school plan in place which details how they will tackle bullying. We need to ensure our National Safe Schools Framework is endorsed by all Education Ministers.

However, all of these tools, while valuable, will only be effective if everyone works together to address bullying.
Everyone involved in this initiative should be congratulated for their commitment to this important issue.
You can join the campaign by taking the pledge on Facebook:
https://www.facebook.com/beboldstopbullyingau/app_225649917566630 and you can spread the message in your community by liking the Facebook page: https://www.facebook.com/beboldstopbullyingau