LONDON: Former British number one Elena Baltacha has died of liver cancer at the age of 30, it was announced on Sunday.

Born in Ukraine and brought up in Scotland, Baltacha revealed she had the illness in March, having being diagnosed in January.

Baltacha, who was British number one for nearly three years, only retired from professiona 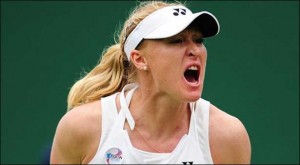 l tennis in 2013. “We are heartbroken beyond words at the loss of our beautiful, talented and determined Bally,” said her husband Nino Severino in a statement published by the BBC.

The daughter of Sergei Baltacha, who played professional football for Ipswich Town and Inverness Caledonian Thistle, she was diagnosed with primary sclerosing cholangitis, a chronic liver condition which compromises the immune system, aged 19.

Despite her illness and injury problems, she reached the third round of the Australian Open in 2005 and 2010, and achieved a career-high world ranking of 49.

She won 11 singles titles, made the third round of Wimbledon in 2002 and was a member of Great Britain´s Fed Cup team for 11 years.

Lawn Tennis Association (LTA) head of women´s tennis Iain Bates said “Today (Sunday) we have lost a shining light from the heart of British tennis — a true role model, a great competitor and a wonderful friend. We have so many special memories to cherish, but this leaves a gaping hole for everybody in both British and women´s tennis, and words simply cannot express how saddened we are by this news. All our thoughts are with Nino and the rest of Elena´s family. We will miss you, Bal.” (AFP)