PM David Cameron to resign after UK votes to leave the EU in referendum that could seal the fate of the union.

Britain has voted to leave the European Union in historic EU referendum. The result shocked the European leaders, threw financial markets into turmoil and forced Britain’s prime minister to resign.

The people of Britain voted for a British exit, or Brexit, from the EU in a historic referendum on Thursday which has prompted celebrations among Eurosceptics and sent shockwaves throughout the world.

The official results were announced on Friday with the Leave campaign receiving 59,1 percent in Thursday’s historic referendum.

The vote is perhaps the most dramatic to date in a wave of populist and nationalist uprisings occurring on both sides of the Atlantic that are overturning traditional notions of what is politically possible.

British and European leaders now have to a lengthy and painstaking process to negotiate the terms ofBritain’s future relationship with the EU. At the same time, EU leaders will have to consider reforms to discourage other EU members from following Britain’s lead.

PM David Cameron has announced to resign after UK votes to leave the EU in referendum that could seal the fate of the union.

United Kingdom Prime Minister David Cameron said, “The British people have voted to leave the European Union and their will must be respected.”

In an emotional address outside 10 Downing Street, Cameron said the country now deserved “fresh leadership” and announced his resignation on Friday morning, just hours after the results of a dramatic referendum showed that the British people had voted to leave the European Union.

“I do not think it would be right for me to try to be the captain that steers our country to its next destination,” Cameron told reporters on Friday.

“The country requires fresh leadership to take it in this direction,” Cameron said speaking outside 10 Downing Street in London.

Britain prepares for economic shock after breaking with European Union

The Bank of England said on Friday it would take all necessary steps to shield Britain’s economy from the shock decision by voters to pull the country out of the European Union which caused immediate turmoil on financial markets.

Quitting the EU could cost Britain access to the EU’s trade barrier-free single market and mean it must seek new trade accords with countries around the world. The United Kingdom itself could break apart, with leaders in Scotland — where nearly two-thirds of voters wanted to stay in the EU — calling for a new vote on independence.

The EU for its part will be economically and politically damaged, facing the departure not only of its most free-market proponent but also a member with a UN Security Council veto and powerful army. In one go, the bloc will lose around a sixth of its economic output. Populist leaders in France and the Netherlands demanded their own referendums to leave.

EU to assess its future next week without UK

Donald Tusk, the president of the European Union Council, says that leaders will meet without Britain at a summit next week. “We are determined to keep our unity as 27 … I will propose that we start a period of wider reflection on the future of our union,” he said, adding: “What doesn’t kill you, makes you stronger.”

“There is no hiding the fact that we wanted a different outcome of yesterday’s referendum,” Donald Tusk said in Brussels on Friday.

The decionve a profound effect on the European Union, which will lose a major military and diplomatic power within its ranks. “This looks to be a sad day for Europe and for Britain,” said Germany’s foreign minister, Frank-Walter Steinmeier. 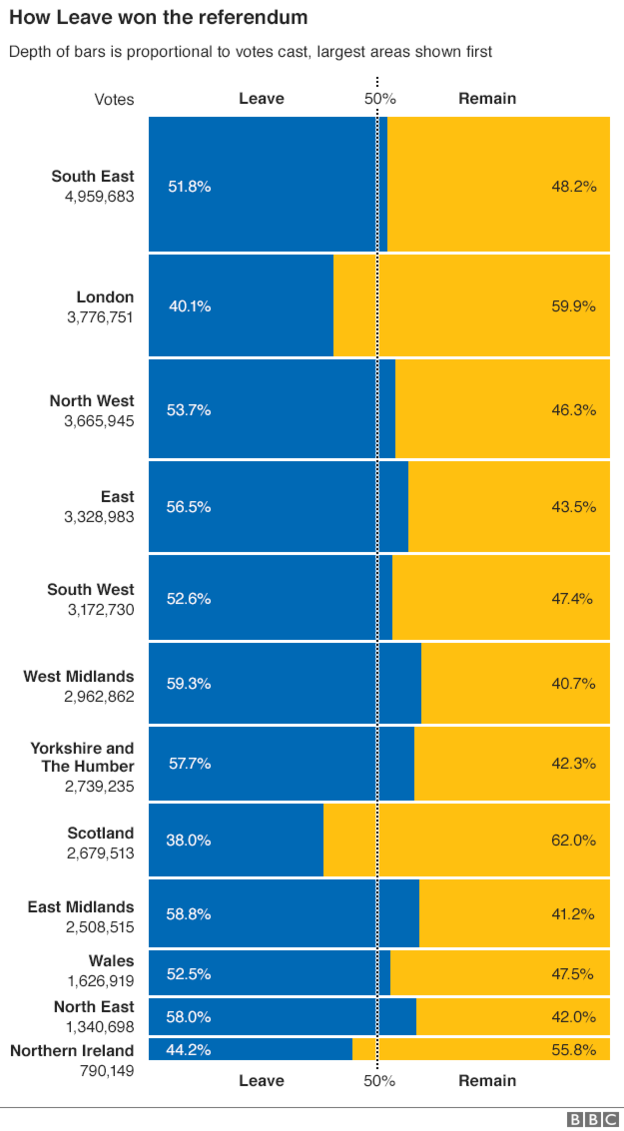