BRISBANE (Australia) — Instead of hand writing their personal information on the paper cards, international passengers at Brisbane Airport will be able to fill out their departure cards electronically in a trial of what the airport says is a world first. Travellers heading out of Australia can enter the details on Brisbane Airport’s mobile app, which is converted to a QR code.

This QR code is then scanned at an airport kiosk to create a custom printed card that a passenger still needs to sign before they are processed by Customs. The information can also be stored on the app for use in future travels.

Brisbane Airport claims to be leading the way with the trial of an innovative Digital Departure Card for international passengers by replacing the existing paper-based process.

Under Australian law, departing international travellers are required to fill out an outgoing passenger card with details of their identification and record of departure.

The digital departure card has been developed as a function within Brisbane Airport’s mobile application in conjunction with the Queensland University of Technology.

It allows travellers to enter and save their personal information to the app before they arrive at the airport.

The data is converted into a QR code that is scanned and printed at dedicated kiosks within the airport’s international terminal.

Passengers can then sign the card and hand it to Customs officers as part of their departure.

Frequent travellers can save their information within the application for future international travel from Brisbane Airport.

Brisbane Airport chief executive Julieanne Alroe said the feature was developed in-house with support from a number of external partners such as Queensland University of Technology.

It also received the backing of the Australian Customs Service and Department of Immigration and Border Protection, which “recognised the huge potential of this initiative”.

“We saw great potential in the idea and with approval from the Department to proceed, BAC provided the capital and resources to develop the program and necessary infrastructure, as well as ensuring all boxes were ticked from a practical, logistical and legislative perspective,” Alroe said in a statement on Tuesday.

“The result is an Australian if not a world first digital solution that will save time, streamline processing and help reduce anxiety associated with departure formalities, especially for non-English speaking travellers.”

“Filling out arrival and departure cards stood out as being a process that some people struggled with, particularly those who didn’t speak or read English,” Professor Alexander Dreiling, chair of airport innovation at QUT said in a statement.

“This ultimately involved students from the Business and Science and Engineering faculties coming on-board at both graduate and undergraduate levels to develop an electronic prototype which was presented to [Brisbane Airport].”

The printing solution was created by Brisbane-based entrepreneur Stephan Clemens and his company Kernhard. Brisbane Airport said it hadn’t been able to find an appropriate solution from mainstream suppliers. 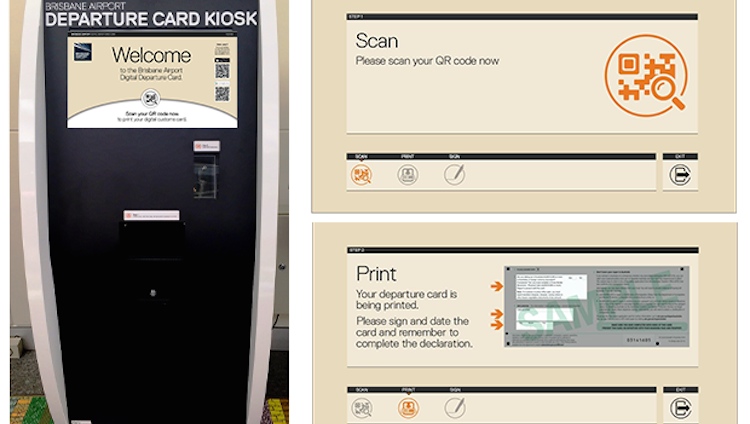