Brazil’s federal police have threatened to stage a nationwide strike during the month-long World Cup if the government does not increase their pay and improve working conditions. 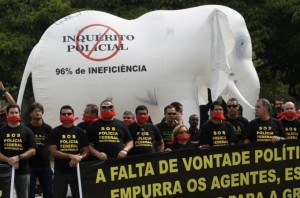 Officers held a protest rally on Wednesday outside the Rio de Janeiro concert hall, where national team coach Luiz Felipe Scolari was announcing his line-up for the soccer tournament, which is to begin June 12.

Associated Press news agency reported that about 50 protesters covered their mouths with red scarves and held banners. They stood next to a life-size inflatable white elephant to complain about the high costs that the World Cup has brought to a country still struggling with deficient public services.

“We gave all possible deadlines,” said Andre Vaz de Mello, president of the federal police union. “If we do not see a government response to change things, we will stop working during the World Cup.”

At Rio’s Copacabana Beach, other protesters lined up soccer balls with red and black crosses on the sand, showing photos of victims who have been killed or injured in gunfights in the city’s supposedly “pacified” slums.

Brazil has been criticised for falling behind in its preparations for the World Cup.