As a boxer, Ali will be remembered as a three-time world heavyweight champion who won 56 bouts over a 21-year career.

Muhammad Ali, the greatest heavyweight boxer the world has ever known and an icon for many, died on June 3 in Phoenix. He was 74.

Ali, who earned the nickname ‘The Greatest’, suffered from Parkinson’s Disease since 1984. He was taken into hospital on Thursday for a respiratory condition and had been being kept in “as a precaution”. News of his death was released by his family’s spokesman early on Saturday morning (GMT).

Ali, in his own words, was the “prettiest, the most superior, most scientific, most skilfullest fighter in the ring”.

He finished with a record of 56-5 with 37 knockouts and was the first man to win heavyweight titles three times.

However, Ali became much more than a colourful and interesting athlete.

In particular, Ali’s refusal to fight in the Vietnam War caused him to be suspended from boxing for almost four years, at the prime of his physical prowess. “Why should they ask me to put on a uniform and go 10,000 miles from home and drop bombs and bullets on brown people in Vietnam while so-called Negro people in Louisville are treated like dogs and denied simple human rights?” He asked.

Politicians, athletes and celebrities immediately flooded to social media to pay tribute to “The Greatest”. Ali was also described as a “humble mountain” and “the biggest and the best”.

“What is genius but balance on the edge of impossible?” Norman Mailer once wrote, after witnessing Ali’s famous eighth-round knockout of George Foreman in Zaire in 1974, known as the “Rumble in the Jungle,” a fight in which Ali let himself get repeatedly pummeled on the ropes by Foreman, exhausting him, before Ali sprung ferociously to life and prevailed. 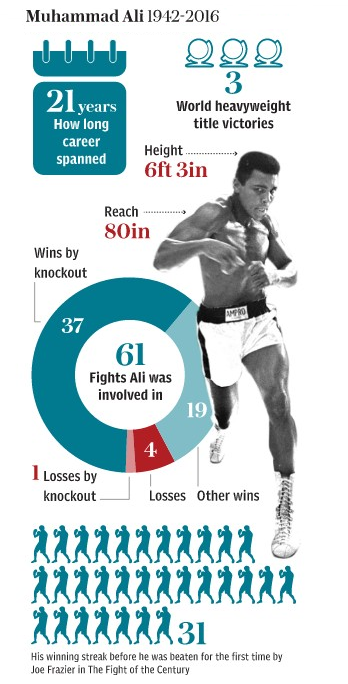