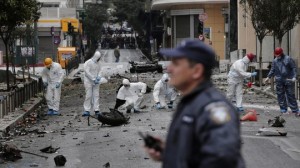 The blast came as the Greek government announced a triumphant return to international bond markets for the first time in a four-year economic crisis, in which the government accepted multibillion-euro bailouts from international creditors in exchange for austerity conditions that have left many Greeks struggling financially.

Greece, which owes more than 240 billion euros, or about $333 billion, to its creditors, said it raised 3 billion euros Thursday in a five-year bond deal at a low interest rate that signaled renewed confidence in a country that was once on the brink of bankruptcy.

After the blast, the Greek finance minister, Yannis Stournaras, appeared unperturbed, describing the country’s foray into bond markets as “a catalytic undertaking,” adding that Greece had made “the biggest fiscal adjustment ever recorded since World War II.”

A government spokesman, Simos Kedikoglou, condemned the bombing. “The evident target of the attackers is to change this image, and change the agenda,” Mr. Kedikoglou said on a morning television news program. “We will not allow the attackers to achieve their aim.”

No one claimed responsibility, but two news outlets received warning calls shortly after 5 a.m. Some offices in the central bank were being used by representatives of Greece’s so-called troika of lenders, the International Monetary Fund, the European Commission and the European Central Bank.

The blast shattered windows, leaving intact only two wheels and the axle of the car. Militant groups in Greece have frequently set off bombs near symbolic targets or taken other steps to convey an antigovernment message.

Chancellor Angela Merkel of Germany, who more than any other leader in Europe is associated here with fiscal austerity, is scheduled to travel to Athens on Friday to meet with Prime Minister Antonis Samaras and is expected to affirm that the Greek government is on the right economic path.

Security around Ms. Merkel’s visit is expected to be tight, with the center of Athens locked down and helicopters patrolling.

On Wednesday, around 20,000 demonstrators gathered near the Parliament building to protest tax increases and spending cuts, and to decry the bond issue as irrelevant for most Greeks.

Mr. Samaras is trying to burnish Greece’s image at a time when international investors are starting to believe the long-running European debt crisis may be over. He has hailed the bond sale as a success story reflecting optimism that Greece and other euro zone countries have turned a corner.

The bond offering also comes ahead of pivotal local elections in Greece in May that coincide with elections for the European Parliament in which Mr. Samaras’s New Democracy party faces a challenge from the leftist Syriza party and from the far-right Golden Dawn group, whose appeal has grown among Greeks weary of the austerity measures.

The already charged political scene has heated up further in recent weeks with the emergence of a new party called the River, which has quickly garnered support in public-opinion polls, presenting another test for the government.

A successful bond offering would be a morale booster, analysts said. Mr. Samaras has already pledged to return around two-thirds of a €2.5 billion primary surplus — which does not count debt payments — to the hardest-hit Greeks before the elections.