BEIRUT:A bomb went off in front of a mosque and killed 14 people in Homs, Syrian state television said on Friday, with forces loyal to President Bashar al-Assad

looking close to wresting the symbolic central city back from rebels. 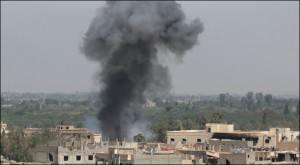 “Fourteen people were killed and dozens wounded in a terrorist bomb in front of the Bilal al Habshi mosque … as people left the mosque,” state television said.

The mosque is in a government-controlled part of Homs.Syrian authorities generally refer to attacks by rebels as “terrorist”, but there was no way to verify who was responsible

The Lebanese Al-Mayadeen TV station, which has reporters in Syria, said it was a car bomb.

Hundreds of rebel fighters and civilians remain trapped in the ancient quarter of Homs, surrounded by government forces and pro-Assad militia. A deal agreed at peace talks in Geneva this year allowed some civilians to leave.

But further negotiations broke down following heavy fighting this week.A city with a mixed Sunni Muslim, Alawite and Christian population, Homs was the scene of early protests against Assad in 2011 that, after he tried to crush them by force, spiralled

into an armed insurgency.

Homs has since evolved into a symbol of the destructive nature of Syria´s civil war, with many of its neighbourhoods levelled by army bombardment.

The state news agency SANA quoted a military source on Friday as saying the army had “eliminated” rebels in central Homs and taken control of buildings in Bab Hood and Wadi al-Sayeh neighbourhoods, both contested districts.

The opposition National Coalition, a political body in exile, warned on Thursday of a massacre if Assad´s forces were to push through into the small pocket of rebel-held Homs.

More than 150,000 people have been killed in the civil war, a third of them civilians, according to the anti-Assad Syrian Observatory for Human Rights. Millions have fled the country.