MUMBAI: Bollywood’s glamour girl Rakhi Sawant has embarked on a political journey, as she announced her plans to contest the Lok Sabha elections this year. 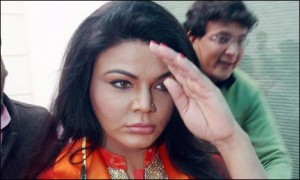 The sizzling item girl of the silver screen said that she would either get a ticket from Bharatiya Janata Party (BJP) or fight the elections as an independent candidate.

According to Indian news website, Rakhi Sawant has also decided to launch a party with a green chilly as its symbol.