The elite, new, all-touch Porsche Design P’9982 Smartphone from BlackBerry is uniquely designed and expertly crafted. The P’9982 is exquisitely fashioned from high-quality materials and features a customized version of the BlackBerry 10.2 operating system to give you the ultimate personal experience. 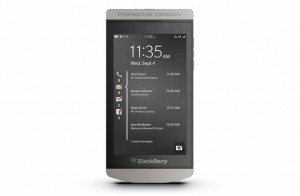 The new Porsche Design P’9982 smartphone from BlackBerry represents the second collaboration between Porsche Design and BlackBerry and is the first smartphone of the collaboration on the BlackBerry 10 platform.The P’9982 is exquisitely fashioned from high-quality materials and features a customized version of the BlackBerry 10.2 OS to give customers the ultimate personal experience.The combination of the P’9982 and BlackBerry 10.2 OS brings customers all the great productivity features of the platform, now through its 3rd iteration, with features like the powerful BlackBerry Hub, the exceptional touchscreen keyboard and the industry leading BlackBerry 10 browser.The P’9982, which extends the Porsche Design luxury brand’s range of modern luxury smartphones, features a satin finished frame forged from the finest quality stainless steel, complemented by a hand-wrapped genuine Italian leather back door. Distinguishable by its special series of PIN numbers, owners of the P’9982 will be instantly recognizable in the exclusive world of Porsche Design smartphone owners.The smartphone carries Porsche Design’s luxurious, iconic styling uniquely through the BlackBerry 10 experience to give you an exquisite handset purposely built to excel at mobile communications, messaging and productivity. One of the most powerful and compelling features of BlackBerry 10 is its full multitasking capabilities. Multitasking has long been a differentiating feature on the BlackBerry platform, and BlackBerry 10 takes multitasking to a whole new level and introduces a new feature called Active Frames.When you launch an application in BlackBerry 10 it runs in full screen. When you want to launch or switch to another app, a swipe up from the bottom of the display will minimize the app. In its minimized state, the app is still active and functioning – it becomes an Active Frame that can display certain information to you, which is set by the app developer. For example, the minimized Calendar displays upcoming appointments; the Weather app’s Active Frame, shows you the current temperature and conditions as well as a forecast summary.The Active Frame panel shows you all of the apps you’re running – you can have up to 8 apps running at one time – and automatically appears between the BlackBerry Hub and the application grid when you minimize your first app. The Active Frame panel makes it very easy to switch between apps and multitask, while each frame can give you useful information at a glance.BBM has been a key feature and one of the most compelling apps on the BlackBerry platform. While BBM began as a convenient and effective business messaging tool, today it is an essential part of daily communications offering real-time engagement for customers around the world.With the launch of BBM version 7 for BlackBerry smartphones running OS 5, 6 or 7, BBM began supporting free voice calls over a Wi-Fi connection. The voice chat feature is also supported in BBM on BlackBerry 10, allowing you to voice chat with any contacts that are running on BlackBerry 5, 6, or 7, as well as those running BlackBerry 10. BBM also supports Android and iPhone, letting you connect with family, friends and colleagues on those devices as well.For anyone running BlackBerry 10, BBM goes even further, giving you the ability to have video chats as well as share your screen with other BlackBerry 10 contacts.You can also now instantly reply to a BBM message without even leaving the app you’re in.The P’9982 features two cameras, each capable of capturing HD video. The rear facing camera features autofocus and can capture 8MP shots in an instant. It includes a bright LED flash that can be set to activate automatically or not at all. The front facing camera is ideal for taking a shot of yourself (or you with a couple of friends) and quickly sharing it on a social media site, or for video chatting over BBM.The BlackBerry 10 camera introduces a number of features including the unique and powerful Time Shift mode, a fantastic feature for getting a group shot where everyone is smiling with their eyes open. The camera also flows with the Pictures app. The most recent picture taken will show up as a thumbnail in the bottom left corner of the display. Tapping it opens the shot in the Pictures app, where you can enhance it, quickly apply a number of filters to it, and easily share it through email, BBM, and social networks like Facebook and Twitter.BlackBerry Balance is a feature that is available for customers that are connected to BlackBerry Enterprise Service 10. It allows your personal information to be separated from your work data. Corporate data remains within a work perimeter that can be managed by administrators, while personal data like apps downloaded from BlackBerry World, personal email accounts, and photos are yours to enjoy.Beyond accessing the Personal and Work spaces of the device, the experience is further integrated. The Hub of BlackBerry 10, as well as the Calendar app, can contain both personal and work information, allowing you to freely interact with both. BlackBerry Balance automatically locks the work accounts after a set period of time, providing protection for work information without interrupting the personal experience.Currently running applications appearing on the Active Frames panel and can include both work and personal apps. You’re able to launch apps from both the Personal and Work perimeters and seamlessly multitask between them. Currently running work apps are labeled with a small briefcase icon overlaid onto the Active Frame.