NEW DELHI: Reaching out to Muslims ahead of Lok Sabha elections, the Bharatiya Janata Party (BJP) on Tuesday asked the community to not go by the ‘propaganda’ spread by Congress and promised to stand for equality and apologise for any ‘mistake’ or ‘shortcoming’ in the past. 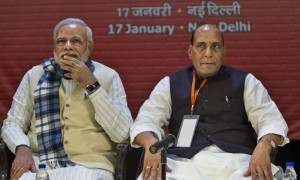 “Please note that whenever, wherever if there has been any mistake and shortcoming on our part, I assure you that we will apologise to you by bowing our heads,” said BJP chief Rajnath Singh while addressing a gathering of Muslims here.

Mr Singh said the BJP was not against Muslims and the community should not go by the propaganda against it. He asked them to vote for BJP this time for the sake of the nation.

“Try us once. We don’t come up to your expectations, don’t look at us ever again,” he said at the event titled ‘Modi for PM — Mission 272+ — role of Muslims’ here.

The BJP chief asked the Muslim community not to vote for electing a government but for a strong nation where brotherhood and humanity could prevail.