Benjamin Netanyahu has vowed that he will not allow Iran to continue its progress towards nuclear armament if he is re-elected in January. 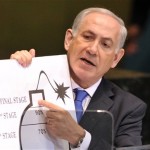 “I am of course ready to press the button if necessary,” he told Israel’s Channel 2 in an investigation aired on Monday evening.

“As long as I am prime minister, Iran will not have the atomic bomb. If there’s no other way, Israel is ready to act.”

The report revealed that the prime minister had in fact ordered his armed forces to prepare a unilateral strike on Iran’s nuclear facilities in 2010, only to pull back from the brink of war.

The trigger for the order to raise the alert level could have been a report from the International Atomic Energy Agency in Feb 2010 voicing concern over the “possible existence in Iran of past or current undisclosed activities related to the development of a nuclear payload for a missile”. (Source; By Phoebe Greenwood, Tel Aviv).