Unwell cricket commentator offered the chance by broadcasters to work from home in the Aus-Ind Test series.

Australia’s voice of cricket Richie Benaud has been offered the chance to commentate on Test matches from his home this year if he is not well enough to get to the grounds, according to broadcaster Channel Nine. 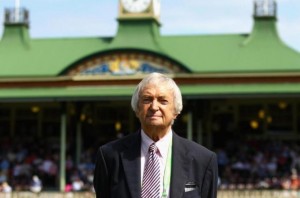 The 83-year-old former Australia captain has been absent from the commentary box since crashing his car into a low wall as he drove to his home in the Sydney beachside suburb of Coogee last October.

Channel Nine Chief Executive David Gyngell said his desire to have Benaud on board for the four-Test series against India later this year meant the offer to broadcast from home was a serious option.

“If he’s not up to calling from the ground this summer, I’d like him to call from home,” Gyngell told the Sydney Morning Herald. “He’d be the ultimate armchair caller from the couch, wouldn’t he?

“I’d prefer to have him calling at the ground, but I would say that will be difficult. If I have my way, he will be calling it from his home but it is completely his decision.”

While Benaud’s ill-health meant he missed the last Ashes series, he was represented at the Sydney test by dozens of fans dressed up in silver wigs and beige suits waving oversize Channel Nine microphones.