A UN tribunal has awarded Bangladesh nearly four-fifths of an area sprawling over 25,000 sq km in the Bay of Bengal, ending a three-decade old dispute over a sea border with India, officials of both countries have said. 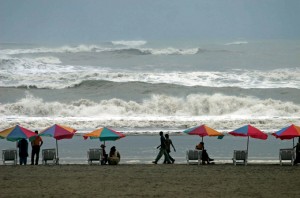 The verdict, binding on both countries, opens the way for Bangladesh to explore for oil and gas in the Bay of Bengal, the site of important energy reserves.

“It is the victory of friendship and a win-win situation for the peoples of Bangladesh and India,” Bangladesh’s Foreign Minister, Abul Hassan Mahmood Ali, said on Tuesday while announcing the ruling of the Hague-based Permanent Court of Arbitration (PCA) on the sea boundary.

“We commend India for its willingness to resolve this matter peacefully by legal means and for its acceptance of the tribunal’s judgment,” Ali said in the capital, Dhaka.

“The settlement of the maritime boundary will further enhance mutual understanding and goodwill between India and Bangladesh by bringing to closure a long-pending issue,” India’s external affairs ministry said in a statement, according to the Reuters news agency.

“This paves the way for the economic development of this part of the Bay of Bengal, which will be beneficial to both countries.”

Bangladesh, with a population of 160 million and strong economic growth, has battled supply shortages to keep its gas-fired power plants and industries running.

The award brings to an end an arbitration process Bangladesh kicked off in 2009 under the UN Convention on the Law of the Sea, over disputes with Myanmar and India.