According to a report of Daily Amar Desh, a prominent Bengali national daily, at least 77 people were killed in police firing in February 2013[1]. 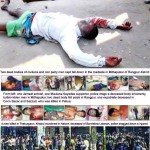 Independent sources put the death toll higher than that. According to some reports more than 70 people have been died in police firing in a single day of 28 February.[2]

According to opposition Jamaat-e-Islami, the party whose activists are the major victims of the government offensive, at least 147 people were killed in police firing from 28 February to 5 March.[3]

Through video footage and newspaper report it was revealed that police used firearms disproportionately and indiscriminately. It was also revealed that law enforcing agencies were not following United Nations Basic Principles on the Use of Force and Firearms by Law Enforcement Officials, which state that security forces shall “apply non-violent means before resorting to the use of force and firearms,” and that “whenever the lawful use of force and firearms is unavoidable, law enforcement officials shall: (a) Exercise restraint in such use and act in proportion to the seriousness of the offence and the legitimate objective to be achieved; (b) Minimize damage and injury, and respect and preserve human life.” Moreover it is a matter of great concern that when some of the government high-ups’ statements are analyzed it gives very strong reason to believe that police action was in line with administrative and governmental repressive policy. On 28 January 2013, Dhaka Metropolitan Police (DMP) Commissioner Benazir Ahmed asked police personnel to open fire targeting Shibir (student wing of one of the Islamist opposition parties, Jamaat) activists as soon as they (Shibir) are visible.[4]

After the mass-killing in February and March Home minister defended the action of police. On 29 March 2013, he said: “If general people were killed in front of police or law enforcers, should the police suck its finger? Police has been given duty to stop this.”[5]

Home minister’s statement is not only making it clear that those who are behind the killing would get impunity but also revealing that police might have done all these as per government directives.

The series of deadly clash started on 5th February 2013, when International Crimes Tribunal, a domestic tribunal in Bangladesh to try the international crimes committed during the liberation war in 1971, handed down judgment on the detained Assistant Secretary General of Bangladesh Jamaat-e-Islami, the largest Islamist political party of Bangladesh, Abdul Quader Molla with life term imprisonment.

Following the verdict, from 5th February, 2013, a group of the young protesters launched a sit-in protest in Shahbag intersection of the capital demanding death penalty of Abdul Quader Molla and all other war crimes accused. ‘Bloggers and Online Activists’, a forum of some pro-liberation and secular youths initiated the demonstration.

Later Bangladesh Chattra League, student wing of the ruling Awami League party joined with them and government MPs as well as ministers expressed solidarity with them. Apparently due to their pressure, government even compelled to bring some amendments to the International Crimes Tribunal Act, 1973 creating a provision for the government side to file appeal for stricter punishment against any verdict of the tribunal.

In the meantime, through some newspaper reports it appeared to general public that some of the bloggers who were involved in the Shahbag movement used to write blogs which contain extremely derogatory comments and indecent remark against Islam and its holy Prophet.

Such a news outraged massive protest across the country. Consequently, religious people nationwide declared some peaceful programs protesting those anti-Islamic bloggers. While observing those programs, police fired indiscriminately upon the protesters that killed at least 18 people from 16 February to 27 February around the country including 5 in Manikganj.

A countrywide general strike Known as Hartal, was called by Islamic parties. During the Hartal five people were killed and at least 50 others injured, many of whom were hit by bullets, when police opened fire in Singair upazila in Manikganj.[6]

According the report of Daily Amar Desh, the clash erupted when local ruling party leader Abdul Majed got involved into altercation with pro-hartal activists over creating obstacle across a road.  Later police came into the scene and at one point police opened fire.

BNP set up a team to probe the killing in Manikgan. According to the convener of the five-member probe body Moudud Ahmed : “From newspaper reports on the police and Awami League criminals opening fire on the people at Manikganj’s Singair, we fear a brutal massacre had taken place there,”[7] said Ahmed

From the television footage and pictures appeared in the news media it becomes apparent that police fired disproportionately and indiscriminately on unarmed protesters. Some of the footages and pictures are available in different blogs.[8]

On 28th February, the controversial ‘International Crimes Tribunal’ sentenced the renowned preacher and the Nayeb-e-Ameer of Jamaat-e-Islami Mawlana Delwar Hossain Sayeedi to death. The tribunal awarded him with death penalty in two charges. Jamaat-e-Islami party rejected the verdict as a whole terming it as a government sponsored conspiracy to wipe out the opposition. Along with the party reaction, at least some general people who follow Sayeedi, reacted against that move. Thousands of angry protesters took to the streets and the police fired huge rounds of bullets to foil the demonstration of the protesters. The result was 73 men, women and children died in a single day, just within 8 hours. Most of the deceased were general people and it was one of the deadliest day in Bangladesh’s history since the independence war of 1971.