A Bahraini police post in a small Shiite village near the capital was attacked by assailants throwing Molotov cocktails overnight, an interior ministry official said Tuesday. 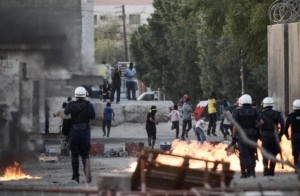 State security forces “repulsed the terrorist attack against the police post in Sitra,” according to Agence France Presse (AFP).

Monday night’s attack resulted in several stores in a shopping centre being damaged, but the official who spoke to Media did not mention any casualties.

Attacks on security forces are on the rise in Sunni-ruled Bahrain and the majority of such incidents take place in Shiite-majority areas around the capital Manama.

In April, a police car was firebombed in Manama’s suburb of Hamad town, mere days after a policeman was wounded nearby. Earlier in the year, a bomb in March in the same village killed three policemen, the deadliest attack on state forces since the beginning of the Shiite-led uprising of February 2011.

Home to the U.S. Navy’s Fifth Fleet, Bahrain is still in political turmoil and is deeply divided despite the 2011 revolution’s best efforts. The uprising, which was quashed by the state, has sparked a slew of protests, police clashes and the arrest of dozens of Shiites on “terror charges”.

A poll by The International Federation for Human Rights states at least 89 people have been killed in Bahrain since February 2011, AFP reported.