Centre for Human Rights calls for cancellation of annual sporting event, linking it to rights violations. 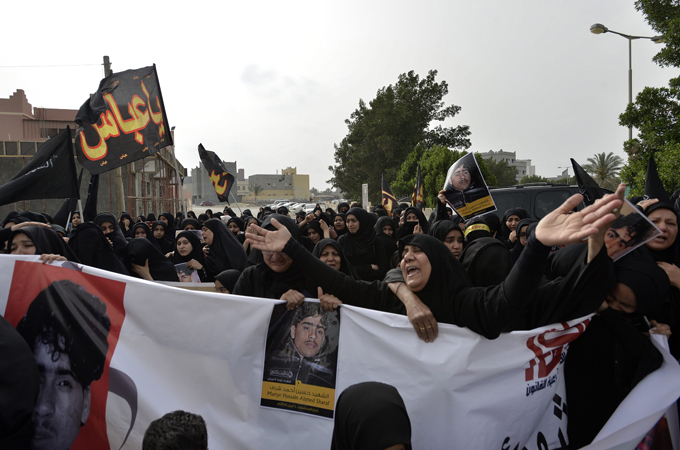 Bahrain’s Centre for Human Rights has called for a boycott of the island’s Formula One grand prix event due to take place this weekend, as sporadic anti-government protests continue in the country.

“The campaign is mainly organised by human rights activists who are calling for not just a boycott but a cancellation of the event as there are links between the race and the escalation of human rights violations,” Maryam al-Khawaja, the centre’s exiled acting president.

Bahrain has seen limited anti-government demonstrations over the last three years, but the Shia-led opposition movement lost steam after the government cracked down on mass protests in the capital, Manama, a month after they started in February 2011.

The annual Formula One event is due to start on Friday, a day after anti-government demonstrators and police clashed in the town of al-Eker, with police reportedly using tear gas and bird-shots to disperse crowds following the funeral procession of Hussain Sharaf.

Sharaf was on the run after being sentenced to life in prison in absentia for killing a policeman in 2012, according to Bahrain’s Gulf Daily News newspaper.

He was killed by a blast in his house on Thursday. The cause of the blast was not immediately known.

“The presence of journalists to cover the F1 race will be a chance for the people of Bahrain to highlight their grievances and legitimate demands to the international media,” al-Wefaq’s Secretary General Shaikh Ali Salman said in a statement published on the party’s website.

The 2011 uprising in Bahrain forced the cancellation of the race that year, but the event went ahead in 2012 and 2013, despite continuing unrest. This year’s race is due to take place between April 4-6.

“There are [rights] violations all year round but we see it rising before, during and after the race takes place,” al-Khawaja said.

This is not the first time the sporting event in the Arab Gulf nation has been called out. Last year, rights activists called on broadcasters like the BBC and Sky not to air the race.

“Last year we focused on people raising awareness about what is happening in Bahrain but this year we sent out nearly 70 letters to the teams taking part in the event as well the sponsors involved,” said al-Khawaja.

Maryam al-Khawaja, daughter of the prominent Bahraini dissident Abdulhadi al-Khawaja who is currently serving a life sentence, said that the difference this year is that the event’s sponsors actually responded:

“But they gave the usual answer that the event is usually about business and that they don’t get involved in the local political situations.”

A statement from Bahrain’s Information Affairs Authority earlier this week said the event has a positive impact on the country.

“An independent study proved the race brought a gross economic impact of $295m in the past and supported 3,000 jobs across retail, business and hospitality sectors.

“This fact alone supports many of the social grievances being voiced in the country,” the statement said.

Bahrain, home to the US Fifth Fleet, cracked down on the 2011 uprising with the help of forces from neighbouring Saudi Arabia.

But protests have continued and security forces have come under attacks from home-made bombs. One of three blasts last month killed three policemen, including one from the United Arab Emirates.