It isn’t the motion of the ocean that matters so much as what you do with the waves. At one Australian naval base, those waves are being put to use providing steady streams of both electricity and potable water, all while generating zero emissions. It’s all thanks to an innovative green energy production system — the first in the world to provide both power and water with networked generators.

The commercial-scale pods, built by Carnegie Wave Energy Limited, are part of the multi-decade research project known as the Perth Project, which is focused on developing viable wave energy infrastructure, according to Engadget. Situated at Australia’s biggest naval base, HMAS Stirling, the CETO 5 generators each produce 240 kW of electricity.

The CETO 5 is radically different than conventional wave generators in that its float sits under the surface of the water — preserving existing views from shore while simultaneously sheltering the unit from excessive wear during storms — and can deliver both electrical power and high-pressure water directly from the unit itself. This pressurized water, once transported back to land, can be used to drive the filtration process at a neighboring reverse osmosis plant. 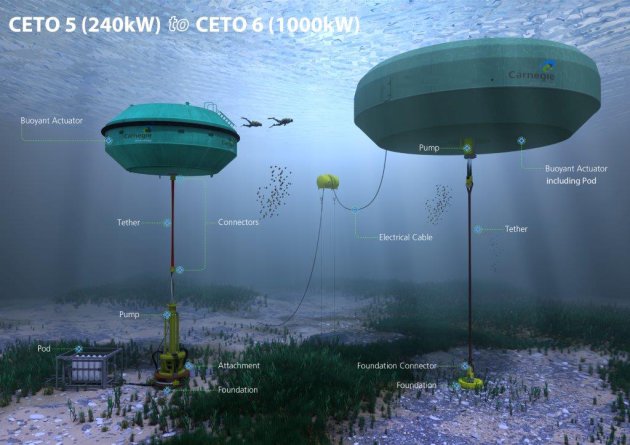 This is a coup for wave energy production technology, which has historically lagged behind both solar and wind power. Being able to produce both power and fresh water without generating any greenhouse gas byproducts could simultaneously reduce our reliance on fossil fuels and provide an essentially limitless supply of fresh water to an increasingly thirsty civilization. The current setup is only a demonstrator model. Should its reliability testing shake down properly, Carnegie says it will build a larger version using a trio of 1MW CETO 6 pumps beginning in 2016.