Sydney (SBS News): TONY Abbott is comfortable Australian companies are paying Islamic groups for halal certification, putting him at odds with two government MPs who want to curb the 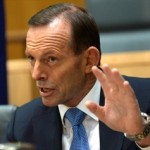 “If we want our exports to grow all the time, this is what we need to do and I think that’s what Australians want,” Mr Abbott told reporters in Hobart following a visit to a halal-certified meat supplier today.

That view isn’t shared by some of his fellow Liberals, including Senator Cory Bernardi who wants an parliamentary inquiry into what he claims is a “racket”.

He wants to clarify whether funds from the certification process were being funnelled into extremist organisations as had been the case overseas, he said.

Processors pay Islamic organisations to certify that foods are prepared according to Islamic law.

The issue is becoming more important as Australia seeks to kick-start talks on a free trade deal with the Gulf states, as well as boost exports to Asia.