A protest rally to stop the genocide of Rohingya Muslims was held at the Sydney Town Hall, on Sunday the 24th of 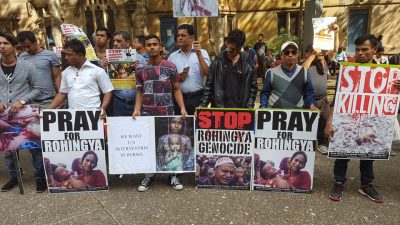 September 2017. Pakistani community unified with other communities gathered around 1.30pm, to send a strong message to the world. The protest was led by Syed Atiq ul Hassan, a prominent journalist, and a community leader. Couple of hundred people from different communities gathered in this rally raising banners and placards in support of Rohingya Muslims and against the on-going genocide of Rohingya Muslims in Myanmar. 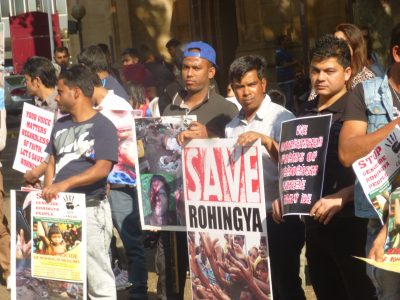 Muslims in Myanmar said, “The world has seen over the last 100 years, the genocide and ethnic cleansing, we must stop and not let this one, let go unprotested”, he said when he was the foreign minister he had met the government counter parts, and Aung San Suu Kyi when she was in opposition, I acknowledge their progress towards democracy and in view of the progress Australia would lift the sanction on Myanmar, and now I said due to this on-going ethnic cleansing of the minority of Rohingya Muslims to impose targeted sanctions on Myanmar. Hon Bob Carr said, he would continue to do whatever he can to stop this human tragedy in Myanmar.

The Greens’ NSW Senator, Hon Lee Rhiannon in her address to the rally strongly condemned the killings and massacre of Rohingya Muslims going on in Myanmar, she said, “We are gathered here with you today, to send our strongest voice to the world. They must speak up against genocide of the Rohingyas; that is what we need. The crimes that have been committed: the gang-rapes, the disappearances, the murders. This is genocide, genocide occurring in 2017. And that is why we need to raise our 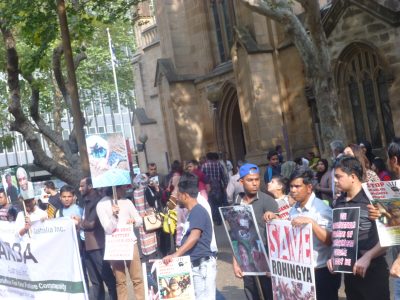 voice in the strongest way.”, “We must listen to the victims and confront ourselves with the images of the desecrated victims and the testimonies of the survivors. It is a one-sided war of extermination by the Myanmar army against Rohingya civilians—every bit as evil as the Cambodian genocide. The world is being asked to look away while the Burmese army and the Rakhine extremists exterminate, extinguish and expel the remnants of the Rohingya people from Myanmar.”, ” The international community must take action to stop this massacre against the Rohingya people. The obligation to prevent and punish the crime of genocide is erga omnes. It is an obligation on all to stop the crime of genocide. It is an obligation on the UN signatories to adopt ‘responsibility to protect’ protocols. ‘We demand, on behalf of all humanity, that the Myanmar government stop the killings of the Rohingya people.’ That is a statement from the Burmese Rohingya community in Australia, many of whom live in Sydney.”

Rana Zafar Hussain, a young youth leader from Pakistani community said, “we are with the Rohingya Muslims and we continue to protest for them as they need us badly”, “where is the national media today, why didn’t they bother about today’s protest”, “where are government of Muslims countries, why they opted to keep their mouth shut”.

Syed Atiq ul Hassan, a prominent journalist and a lead organiser of this protest, while addressing to the protest said, 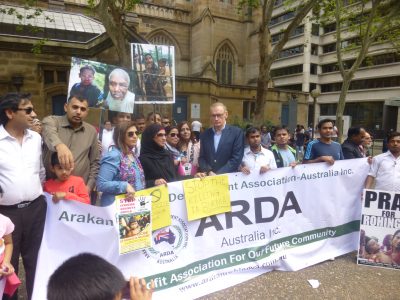 “it is shocking to see the hypocritical attitude of the international powers, at one side, they bombarded Afghanistan, Syria and Iraq to wipe out the terrorists on the side they are just watching silently the state-sponsored terrorism in Myanmar against a small minority of Rohingya Muslims – Why? because they are weak, they are poor, they don’t have voice internationally”… “we, as Australians, condemn all forms of terrorism, killings, violence against any nation, community, group, or race in any part of the world, and today we gathered here because a systematic ethnic cleansing is going on of a minority Rohingya Muslims by the state-sponsors terrorists in Myanmar and we stand-by with the victims”, “we demand Australian government to impose sanctions on Myanmar and force the Myanmar’s government to immediately stop the genocide of Rohingya Muslims and at the same time, open its borders for humanitarian aids for Rohingya Muslims”.

Naseer Nazir, another prominent community leader from Pakistani community and the President Insaf Research and Professional forum, said, “its shame that Noble Peace Prize laureate Ann Sung Su Ki refused to accept centuries old living community of Rohingya Muslims as the citizens of Myanmar”, “Australian Government should put diplomatic pressure to stop the genocide of Rohingya Muslims”, “the world should act now to refrain the repeats of Srebrenica massacre”, “the international community should stop this massacre and act before another mass human displacement is repeated”.

Mohammad Rauf, Director ARDA Australia and active Member of Rohingya Community, said, this is the time that we must unite and stand-by with the Rohingya Muslims in Myanmar. He thanked to all the groups and community leaders who are behind the Rohingya community in this difficult time.

A young girl Zainab from the Rohingya community also spoke and demand the world to force the Myanmar’s government to stop the ethnic cleansing of Rohingya Muslims.

Aparna Vats, a political figure and an active community leader from Indian community addressing to the rally said, “When I am thirsty, I turn a tap and clean drinkable water comes out. When I am hungry, I open the fridge door and cannot decide what to have due to a myriad of choices. If I am cold, my wardrobe has multiple garments for me to access, If I feel tired, I don’t know whether to lie down on my bed, the couch, the sofa or the lawn outside. When my government leaders make decisions that affect our humanitarian rights, I peacefully protest and invite friends to rally just like this until these leaders’ heed to our requests. This is not the case for the Rohingya people.”, “The Rohingya people are no longer alone they now have the entire world behind them.”, “Are the leaders of Myanmar so void of basic human emotion and conscience.”

Muhammad Farooq Solicitor, Human Rights activists and community leader said, in his speech said, “we are gathered here to protest against the slaughtering, brutal rape, ethnic cleansing campaign, cutting, burning and burying live of our Burmese brothers at the hands of the Burmese Military forces…”, “the world has always spoken about terrorism.  The massacres and brutalities against the Rohingya Muslims in Myanmar are an illustration of that terrorism, this is a genocide.”, “the Burmese government which is led by a dictator made a law in 1982 and declared more than 800,000 Rohingya Muslims as illegal citizen, who are the native residents of that area. Since last month more than 3000 people have been killed and more than 400,000 have been forced to escape to Bangladesh…”, “the silence of all super powers, UNO and countries of the Islamic world over the actions of the Burmese’s government is like a black spot on the face of humanity”, “we urgently demand from the government, UNO and human rights activists to please act against the Genocide of Rohingya Muslims at the hands of Burmese Military forces’.

Anamul Haque, representative from Burmese Rohingya community, while addressing to the rally said, its shame that the world powers are silent, doing nothing and watching the killings, raped, burn alive to death the innocent people of Rohingya Muslims. He demanded Myanmar government to provide protection of Rohingya Muslims and they are as much as citizens of Myanmar as others.

Mohammad Imran, another representative from Rohingya community, thanked the continuous support to the Rohingya community by other communities. He said the Rohingya Muslims in Myanmar looking for support from the world on the name of humanity, they are sitting just under the sky with no shelter, no food and no any facility to keep themselves alive, they are badly looking for protection of their lives and the world should immediately look after them.

Mrs. Sarwat Hassan, a well-known stage host was the Master of ceremony of the protest. A dua (pray) for Rohingya Muslims was performed by Muhammed Farooq at the end and the rally was peacefully ended at 4pm.