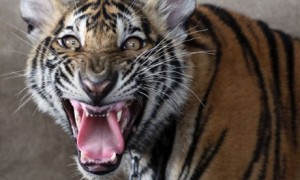 Witnesses at the scene said the attack took place when the man, Paul Goudie, from Werribee (near Melbourne), stepped inside a cage to pet one of the larger tigers. Shortly afterwards, there was a rapid and unexpected attack during which the park attendants had to drag the victim to safety.

The Australian man is now recovering in a Thai hospital after being mauled by a young male tiger in a special tourist enclosure at the Tiger Kingdom, an animal park on the resort island of Phuket. At the tiger park, tourists are invited into a special caged enclosure with handlers as part of the visitor experience.

Paul Goudie, 49, suffered serious bites to his left leg and stomach and is being treated at a Phuket hospital prior to surgery to avoid the risk of infection.

Tiger Kingdom opened in Phuket in August 2013 and sees hundreds of visitors per day – including young children – who pay up to 128 Aus dollar (AUD) for a full-package ticket, which allows them to visit a host of separate tiger enclosures, posing for photographs with the chained adults – sometimes even sitting on their backs – and feeding bottles to cubs.

Before entering one of the concrete enclosures, guests are required to remove all loose belongings, including shoes, wash their hands, and sign a waiver denying Tiger Kingdom of any responsibility in the event of an accident.

“We did everything as the park people advised, still I am not sure why it bit me,” he said. He punched the tiger as it attacked him. “When it did [attack] I had no choice except to whack it in the face a couple of times,” Goudie told reporters from the online news service Phuketwan at the hospital.

A visiting doctor at the scene provided assistance until an ambulance and emergency staff arrived. “The handler was with us the whole time. The tiger was 15 months old. I was patting him, everything was fine. I just stood up to leave,” Goudie said.

Thai authorities say Goudie, who has two steel pins in an ankle, may have moved awkwardly as park handlers assisted him back to his feet, with the unusual movement triggering an attack. The tiger was tasered by park staff, forcing it to retreat.

Goudie is on a two-week holiday in Phuket with his family. His son, 16-year old Jake Goudie, said the injuries were largely to his father’s left leg and stomach. “The tiger couldn’t get a good grip on my dad’s stomach,” Jake said.

Thai officials said the tiger park was to be closed for two days while investigations into the accident were conducted. The young tiger will no longer have contact with visitors. Goudie, who has a tattoo of a tiger, praised the park’s staff and said he was even considering another tiger tattoo. “I don’t want anything to happen to the tiger,” he said. “I don’t want it killed.”

Despite safety and animal welfare concerns, Thailand’s tiger parks, where visitors are allowed to interact with the animals, have grown in popularity in recent years. There have, however, been numerous well-documented and even fatal attacks on tourists by so-called “tamed” and apparently submissive big cats.

Last year, a 19-year old British student, Isabelle Brennan, was left scarred for life after a 400lbs tiger knocked her to the ground and bit through her thigh at the Tiger Temple park in the Kanchanaburi district.