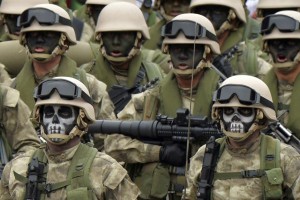 By A Special Correspondent

DUBAI – A 200+ team of Australia’s Special Forces are standing by in the United Arab Emirates to land in Iraq and take part in ground operation inside Iraq against radical Islamic militants known as “Islamic State” or ISIL.

The 2nd Commando Regiment will lead the Special Forces into Iraq once they get legal clearance from the Australian command, which requires a Status of Forces agreement to protect them from Iraqi prosecution as they conduct combat assistance.

According to reliable sources the Australian Forces were allowed to set up an operational headquarters in the United Arab Emirates and work on intel surveillance and the reconnaissance against ISIL.

Australian Defence Force personal are preparing for a ground battle and newly arrived ADF members were about to take up their paces at a rifle range at a undisclosed location.

According to sources Australia’s 200 Special Forces were ready to get final sign off to enter Iraq by this weekend.

Major General was quoted as saying that “I have every confidence we can defeat ISIL over time. They will go back to be a terrorist organisation, but it is less damaging than holding large parts of country.”

Australia’s Special Forces will have multiple roles but it will be implemented in close cooperation with Iraqi military. One of the main target is to help Iraqi regime to protect Baghdad from ISIL.

Within Baghdad, one of the problems the Special Forces face will be IEDs (improvised explosive devices) not just from ISIL but other Sunni militants and pro-Iranian elements opposed to Western interference in Iraq. It is believed that Australian Special Forces would also backed by U.S. Apache Helicopters already deployed in Fight against ISIS.