Australia will increase defense spending by nearly A$30 billion (US $21.6 billion) over the next 10 years, seeking to protect its strategic and trade interests in the Asia-Pacific.

The defense strategic plan was designed in mind of the changing nature of regional security, particularly China’s economic and military rise and an increased U.S. focus on the Asia-Pacific, Turnbull said.

Turnbull’s announcement was met with criticism from Beijing, which expressed “dissatisfaction” with the “negative” remarks, according to Reuters.

“We hope the Australian side can correctly and positively view China’s development and strategic intent,” Chinese Foreign Ministry spokeswoman Hua Chunying said at a press briefing.

Australian Federal Government will spend $195 billion over the next decade beefing up the capability of Australia’s armed forces — and SA stands to benefit from a focus on maritime projects.

The long-awaited Defence White Paper, released today, reveals that the future submarines project could cost up to $150 billion — three times the original estimate. It will cost more than $50 billion just to buy them.

But Defence officials and industry experts consistently say acquisition is only one-third of the cost, which theoretically puts the whole cost at $150 billion.

The fleet of six Collins Class submarines will be replaced with 12 new “regionally superior” ones — the highest defence procurement in Australian history.

Australia’s new fleet of 12 submarines will cost at least $50 billion just to build, the Turnbull government’s Defence white paper has revealed – at stark odds with  public claims by shipbuilders that they can be constructed at a fraction of that price.

The price tag of more than $4 billion per boat is spread over the next 30 years, but it does not include lifetime maintenance of the submarine fleet, which is likely to be at least that much again and perhaps twice as much, bringing the total of the program to a staggering $150 billion.

The white paper, released on Thursday, outlines Australia’s plans to defend itself for the next 20 years. On submarines, the white paper commits to a “rolling acquisition”, which means that by the time the final boat is built, the first one will be ready to retire, creating a continuous build indefinitely.

While shipbuilders bidding to construct the submarine fleet have put the cost as low as $20 billion or less, the white paper states clearly that Defence estimates the cost of designing and constructing the fleet alone – not including sustainment – will be at least $50 billion. 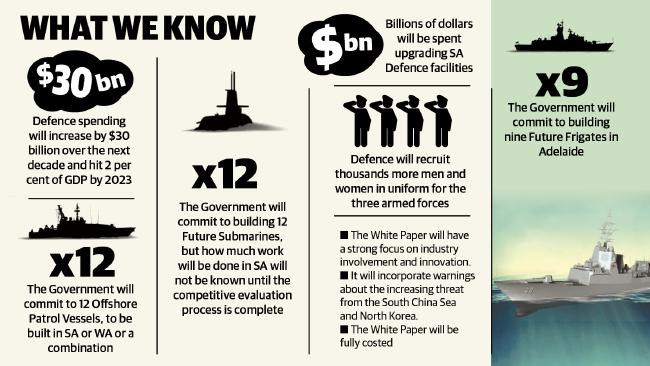