KUALA LUMPUR: Search planes flying deep into the southern Indian Ocean have found nothing so far that could be from the missing Malaysia Airlines jet, Australia´s acting prime minister said Friday. 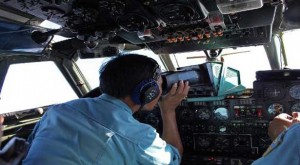 The planes are part of an international effort to solve the nearly 2-week-old mystery of what happened to Flight 370 with 239 people aboard. They are looking for two large floating objects detected by a satellite off the southwest coast of Australia, about halfway to the desolate islands of the Antarctic.

“The last report I have is that nothing of particular significance has been identified in the search today but the work will continue,” said Warren Truss, who is acting prime minister while Tony Abbott is in Papua New Guinea.

Truss said the search was difficult due to testing weather conditions and because the satellite imagery was five days old. “So something that was floating on the sea that long ago may no longer be floating — it may have slipped to the bottom. It´s also certain that any debris or other material would have moved a significant distance over that time, potentially hundreds of kilometers.”

Truss told reporters that two Chinese aircraft are expected to arrive in Perth on Saturday to join the search, and two Japanese aircraft will be arriving Sunday. A small flotilla of ships coming to Australia from China was still several days away.

“We are doing all that we can, devoting all the resources we can and we will not give up until all of the options have been exhausted,” Truss said. “We can´t be certain that the sightings are in fact debris from the aircraft (but) it is about the only lead that is around at the present time.”

The search area in the southern Indian Ocean is so remote is takes aircraft four hours to fly there and four hours back, leaving them only about two hours to search.

Four of the five search planes sent out Friday had returned to Perth, said Lisa Martin, spokeswoman for the Australian Maritime Safety Authority. The last plane, a U.S. P8 Poseidon aircraft, was expected back at 1100 GMT.

John Young, manager of the maritime safety authority´s emergency response division, said the weather had improved from Thursday, but there was still some low cloud cover over the search area, 2,300 kilometers (1,400 miles) from western Australia.

The aircraft are planning to head back to the search zone on Saturday, but the search area will change slightly depending on water movements overnight, Young said. (AP)