The latest combined traffic figures of Cathay Pacific and Dragonair show that the passenger traffic grew by 8.4% while capacity was up by 6.2% in the first four months of the year 2015.

The monthly figures released on Friday by Cathay Pacific Airways, which includes Cathay Pacific and Dragonair, show an increase in both the number of passengers carried and the cargo and mail uplift compared to the same month last year.

Holiday travellers were the key driver of a 2.5 percentage point year-on-year increase in passenger load factor to 87.2 per cent in April as both Easter and Ching Ming festival holidays fell at the beginning of April this year.

“Japan, Korea and Thailand were the most popular destinations for Easter getaways from Hong Kong though we also saw high load factors to other Asian destinations and Australia/New Zealand,” said Patricia Hwang, the company’s general manager of revenue management. The two airlines carried a total of 2.9 million passengers in April, the highest so far this year and up 7.7 per cent on the same month last year.

But demand for premium cabin seats was “behind expectations, especially on long-haul routes”, Hwang said. The succession of holidays in the first four months of the year, which resulted in large gaps in working weeks, had affected Cathay’s premium traffic, she said, while “the aftermath effect” from the Occupy protests late last year was also to blame.

“Holidays such as Chinese New Year in February and Easter in April are positive for load factors, but not so much for premium and business travel,” she said.

Passenger traffic for Europe, Cathay Pacific’s second largest market after North America in terms of revenue passenger kilometres, grew 9.3 per cent year on year in the first four months of the year, a reverse from sustained negative or flat growth last year.

The company attributed that to newly launched flights to Zurich in March and to Manchester starting from December, which had helped increase capacity to Europe by 8 per cent so far this year.

Hwang said Zurich and two other cities recently added to Cathay’s list of destinations – Dusseldorf and Boston – were “major business cities with stronger demand for premium traffic” and it was hoped they would drive more business traffic to the airline in the future.

Cargo volume growth at Cathay slowed in April to lag capacity growth for the first time in a year, just as disappointing mainland macroeconomic indicators for the month also showed the biggest drop in factory activity in a year.

Cargo sales and marketing general manager Mark Sutch said: “Demand out of the key manufacturing centres in mainland China fluctuated throughout the month and we faced intense competition out of Western China cities [Chongqing, Chengdu and Zhengzhou].”

Cathay Pacific General Manager Cargo Sales & Marketing Mark Sutch said: “Our cargo business benefitted from a modest rush in demand out of the home market before Easter and the pick-up after the holiday was reasonably swift. Demand out of the key manufacturing centres in Mainland China fluctuated throughout the month and we faced intense competition out of Western China cities. Transpacific business held up well and we continued to benefit from the logjam of freight in seaports on the West Coast of the United States, even after the industrial dispute was resolved. We saw robust demand out of Southeast Asia, and Vietnam in particular, in April while strong traffic to India remains a key focus.” 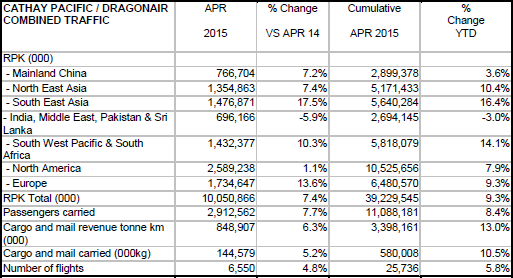 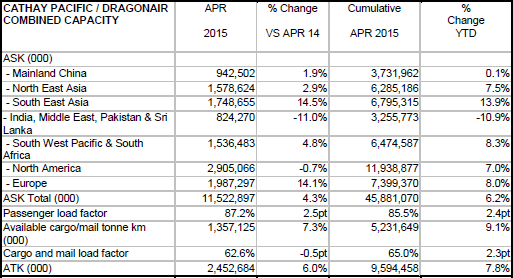