The Socceroos survived a spirited South Korean comeback to claim the biggest prize in the history of Australian football with a 2-1 extra-time victory in the Asian Cup final at ANZ Stadium in Sydney on Saturday night.

In a pulsating final played in front of more than 70,000 supporters at Stadium Australia, Sydney, the Socceroos took the lead against the run of play just before half time thanks to a stunning goal by Massimo Luongo.

A superb goal to Massimo Luongo on the brink of half-time put Australia in the box seat for the result and that effort looked to be the winner as time in the second half ticked away.

Australians secured their first AFC Asian Cup since joining the Asian Football Confederation in 2006 and four years after losing in the final to a late extra-time winner against Japan.

Korea’s wait for a third AFC Asian Cup goes on, meanwhile, as Uli Stielike’s team were unable to break the 55-year hoodoo in the country’s first appearance in the final since 1988.

Stielike made one change to the line-up that saw off Iraq in the semi-finals, calling up Jang Hyun-soo to partner Ki Sung-yueng in the middle to allow Park Joo-ho to sit in front of Kim Jin-soo on the left, while Ivan Franjic was passed fit for an unchanged Socceroos.

The decisive goal came for Australia from the feet of James Troisi, who earns his place in the pantheon of Australian sport for securing the nation’s most important international football triumph. But for his exceptional role in the goal, substitute Tomi Juric will be forever remembered as the man who made it happen.

The final was every bit as gripping as had been predicted and ended as a contender for the most physical match of the whole tournament. That aggressive element only added to the tension of the occasion. 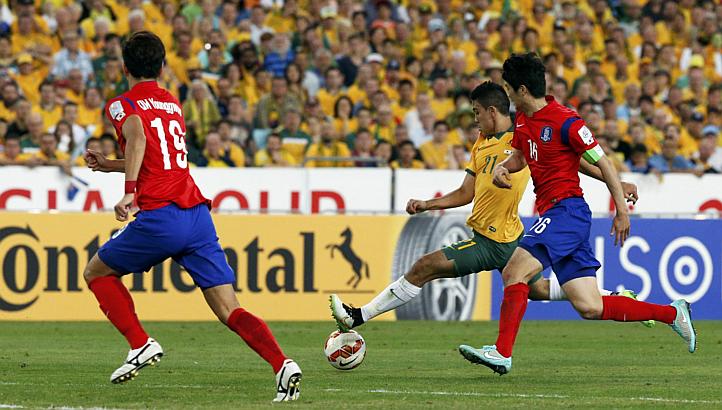 Australia was assertive in the air and on the ground but the Taeguk Warriors lived up to their name, scarcely giving an inch.

It was Son Heung-min who caused the greatest threat to the home side’s goal, volleying just wide in the 37th minute after impressive work down the left from Park Joo-ho and Kim Jin-su while, less than a minute later, the Bayer Leverkusen man was denied what looked a certain goal by Luongo’s outstretched foot.

But with barely a minute left in the half, Luongo struck to put the Socceroos in front. Trent Sainsbury’s ball into the Swindon Town man’s feet allowed Luongo to turn and beat Ki Sung-yueng before hitting a low, unstoppable right-foot effort beyond Kim Jin-hyeon.

The Koreans were forced to push for the equaliser as the second half wore on, and a disciplined Australian defence kept them at bay until, a minute into stoppage time, Son Heung-min latched on to Ki Sung-yueng’s pass to fire beyond Mat Ryan and send the game into extra-time.

But Troisi put the Australians back in front in the 105th minute when he was first to react after Kim Jin-hyeon pushed Tomi Juric’s centre back into play, and the Belgium-based midfielder fired the ball high into the net to seal the win and see Australia crowned champions of Asia.

Postecoglou’s fingerprints are all over the cup after what Socceroos superstar Tim Cahill described as “one of the biggest moments in sport in Australia”.

“I am super proud of everyone the players, the staff and everyone. I couldn’t be happier. It was a different kind of game tonight, it was tough, it was a final and you have to grind it out and no one knows better than me it never goes to script. There’s always twists but the courage the players showed tonight was enormous,” said Postecoglou.

“My only concern was that because we conceded so late, the boys would be so heartbroken they couldn’t pick themselves up in extra-time, but I knew we’d finish stronger. It was just a matter of taking our chance when it came, and we did, and like I said: I’m super proud of them.”

Shaikh Salman, who handed over the prestigious Asian Cup trophy to Socceroos team captain Mile Jedinak after the final whistle at the Stadium Australia Sydney, said it has been a remarkable 23-day celebration of Asian football and the thrilling encounter between Australia and Korea Republic in the final had rounded off the tournament perfectly.

“Australia has won the competition for the very first time in their history, and to do this in front of the home crowd is truly special. I would like to commend the team for their deserved victory,” he said.

“Australia’s win and their standard of performance throughout the competition is a yardstick that all Asian nations should look to follow, and this also goes for their organisation of the whole event. The tournament itself has been tremendous. Filled with quality and excitement, it was a fantastic festival of football that the whole of Asia can be proud of.