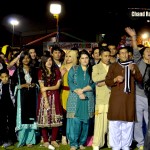 people who came from different part of the world, made Australia home, and now delivering remarkable social services in making Australia a role model of a ‘true multicultural society’.

It’s only until 1960s when non-Anglo-Saxons even did not have even voting rights’ today, they are the public representatives in Councils, State and Federal Parliaments. It’s amazing, how only in 5 decades,  Australia turned-out from a Colony of European setters to an independent multicultural country where people from more 150 nationalities live side-by-side sharing and enjoying different cultures and beliefs.

While the Australian government spends millions of dollars to promote multiculturalism the people of different backgrounds are paying off government initiatives through accepting each other’s ethnic values – believes, ideas, philosophies, religions, languages, cultures, traditional and festivals.

There was a time when migrants did not take interest in participating in Australia Day activities. The Australia day was only limited to Anglo-Saxon Australian. Now from young children to senior citizens, they hold and wave Australian flags, sing Australian National Anthem, and organise Australian Day functions and saying each other ‘Happy Australian Day’. Now Australia Day is no more just a public holiday, it is a celebrations day for everyone, especially, in the last 20 years or so, Australia Day is taking its place as a real National Day like in any other big country.

As the State and Local Governments are allocating significant budgets for multicultural celebrations and on Australia Day, the people from different cultural backgrounds are also taking lot of interest making these events successful.

This year, Australia Day has been celebrated by majority of people in Australia. It has been noticed that this year, in every local Australia Day function organised by local Councils there were lot more crowd than previous years.

The City Council of Auburn NSW with the collaboration of Sydney Olympic Park has arranged a festival-style Australia Day event at the bicentennial Park in Sydney Olympic Park. There were record crowd of over 6,000, people came with their families from the mid day and stayed until the end at late evening. They were in traditional colourful dresses, children, youth and seniors holding Australian flags and enjoying every moment of the event with colourful activities. It was amazing display of multiculturalism through the different cultural performances by different ethnic groups. It was a proud moment when the official ceremony started with traditional Aboriginal song & dance presented by popular indigenous groups followed by speech of well-known indigenous leader Uncle Allen Madden. This was a demonstration of the destiny of Australian nation as One Australia.  Now no more white Australia celebrations instead a true display of multiculturalism. Many cultural groups from Asian, Polynesian, Ango-Saxon, to indigenous Australians took part in multicultural performances.

Then it was incredible to see that many awards were received by the members of the ethnic communities on their excellent social and volunteer services. Today, Australia is represented by people of different colour, race, language and cultural background in every walk of life, from educationists to scientists, journalists to politicians.

It is amazing to see that how the people of Australia have developed their understanding and acceptance of multiculturalism. In today’s politicised world where there has been lot of stereotyping about the relations between Islamic and non-Islamic people, Australia is a place where an event like CREF organised in celebrations of the Islamic festivity has been accepted by everyone (Islamic and non-Islamic communities) and turned out to be the best community event where people of different faith participate and promote harmony and friendship. The recognition of these types of cultural events by local governments will continue to strengthen our multiculturalism and encourage other smaller communities to open their events and make them for everyone. These activities will spread a very positive message to that parts of the world where people are fighting each other, that if people of different faith and beliefs want to live together with respect and acceptance they can.

Much credit goes to the young generation of ethnic communities who have shown real belongings with Australia, they mix with other and organised multicultural events in Universities, and Social Clubs with open mind and vision as Australians. Therefore, we should be proud of our young generation who will uphold the name of Australia as a Multicultural Nation.