Agreement will bolster US air and naval presence in northern Australia to project more power into the Asia Pacific.

The United States and Australia have signed an agreement to bolster US air and navy presence in northern Australia, under a plan to strengthen defense ties and project more power into the Asia Pacific, where China’s influence is growing. 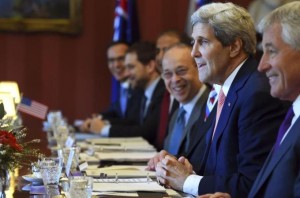 Chuck Hagel, the US defense secretary, and John Kerry, the secretary of state, arrived in Sydney on Monday to finalize an agreement reached between US President Barack Obama and Australian Prime Minister Tony Abbott.

The pact covers the deployment of US marines to Australia for joint exercises and training in areas such as disaster relief.

Talks centered around boosting US air and naval activity in the sparsely populated and resource-rich north with an increased tempo of visits by US fighter jets and bombers.

Around 1,150 Marines are stationed in Darwin in Australia’s tropical north under a 2011 agreement that launched Obama’s push towards Asia.

The contingent, trained to respond to regional conflicts and humanitarian crises, is expected to increase to 2,500 by 2017.

The US-Australia meetings were to include discussions on co-operation in missile defense, cyber security and maritime security, Hagel said on Monday.