DAMASCUS: A car bomb went off in the central Syrian city of Homs on Tuesday, killing 36 people just hours after a mortar attack on the capital, Damascus, killed 14, government officials and state media said. 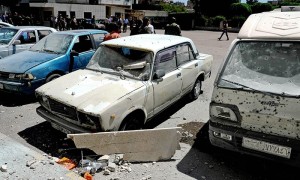 The attacks came a day after President Bashar Assad announced his candidacy for the June 3 presidential elections, a race he is likely to win amid a raging civil war that initially started as an uprising against his rule.

A Syrian government official said the car bomb that hit Homs exploded in the city’s predominantly Alawite district of Zahra.

Along with the 36 killed, 85 people were wounded in the blast, the official told The Associated Press over the telephone from Homs.

He spoke on condition of anonymity because he was not authorised to talk to media.

The Britain-based Syrian Observatory for Human Rights said at least 13 people, including five children, were killed and that more than 40 were wounded in the Homs bombing. Syria state TV only said the car bomb in Homs caused ”a large number” of casualties.

And in Damascus, several mortar shells slammed into the predominantly Shia neighborhood of Shaghour in the morning hours, killing 14 people and wounding 86, Syria’s official news agency and state TV reported.

It was the deadliest mortar attack in the Syrian capital since the conflict began in March 2011.

No one immediately claimed responsibility for the Homs and Damascus attacks Tuesday.

Rebels fighting to oust Assad from power have frequently fired mortars into the capital from opposition-held suburbs. Armed opposition groups have also attacked Syria’s cities with car bombs in the past months.

An Al Qaeda-linked group has previously claimed responsibility for several car bombs in the capital and other cities.

Many of the opposition-held neighborhoods around Damascus have been under a crippling government blockade for months, with no food and medicine allowed to reach trapped civilians inside.

The Observatory also reported the mortar attack in Damascus, saying 17 people were killed.

The group, which tracks the conflict through a network of activists on the ground, said the death toll was likely to rise because of the many wounded.

The conflicting numbers could not immediately be reconciled but different casualty tolls are common in the immediate aftermath of large bombings.

An official at the Damascus Police Command told The Associated Press that two of the mortar shells landed near a religious school in the capital.

Several students who were attending classes at the school were among those killed and wounded in the attack, said the official, speaking on condition of anonymity in line with government regulations.

Homs has been the opposition stronghold since the beginning of the uprising against Assad that erupted in March 2011.

The city, Syria’s third largest, has been the scene of some of the fiercest fighting in the civil war that followed the initially largely peaceful revolt.

Syria’s opposition and its Western backers have blasted the decision to hold presidential elections amid the country’s three-year conflict, which has killed more than 150,000 people and driven a third of the country’s population from their homes.

Syria’s foreign ministry rejected the criticism, saying the decision was ”sovereign” and warned that ”no foreign power will be allowed to intervene” in the process.

In the Iranian capital, Tehran, spokeswoman of Iran’s Foreign Ministry Marzieh Afkham welcomed the elections, saying the vote will be ”an opportunity for peace and stability” in Syria.

Iran has backed Assad throughout the conflict, providing his government with millions of dollars in economic aid and military support through its Lebanese proxy, Hezbollah.

”We think the election is a step closer to ending the crisis, stopping the war and support for peace and stability in Syria,” Afkham said.