The Spanish midfielder saw his playing time lost at times this season in North London to the addition of Mesut Ozil and also due to the rising form of Aaron Ramsey. 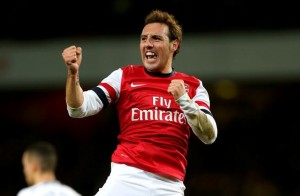 Despite his battle at times with form in the 2013-14 campaign, injuries in the later part of the campaign allowed him to hold down a regular place in the Gunners first team.

However, Spanish champions Atletico are thought to be looking to make Cazorla one of their primary transfer targets this summer as they have the potential to offer him a full time first team roll if some of their believed exit stars to leave the club.

There is belief that the deal could be worth an estimated £18 million if he is to leave Arsenal with the 29-year-old likely to be allowed to leave if the offer is right.

With Arsenal’s transfer policy it is likely that they would let a more veteran player to leave with the hopes of signing a younger replacement in order to pocket some of the earnings.