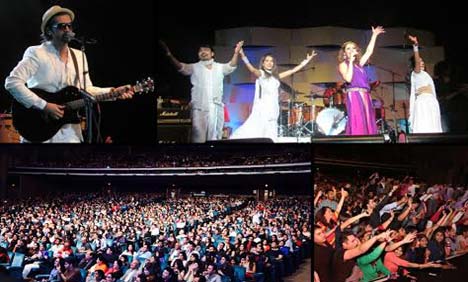 Though, the event was attended by Men, women and children, however a major portion in attendees were young boys and girls, who thoroughly enjoyed the musical festivity.

Shalmali, who is known for being a playback singer in India, entertained with her vocals and dance performances which brought everyone on their feet.

She even performed by coming down into the middle of people in attendees, and forced them into dance on her tunes.

Atif Aslam hit the stage after her performance and captivated the audience with his popular numbers including “Tu jane na”, “kuch is tarah”, “Tera honay laga hun”, “Who Lamhe”, “Tere bin main kaisey jiya”, “Lay ja tou mujhe” and a number of his other songs.

He also performed with the popular Dallas singer Ali Parvez Mehandi, who is son of famous Pakistani ghazal maestro Parvez Mehdi. Their performance brought the youth into their feet.

To see them perform from close, people kept breaching the security circle and the young enthusiasts kept contesting with security personnel.

All the attendees enjoyed the evening very much and their continuous efforts to sneak into closer position made it even more enjoyable.

The event continued till late in the evening. Fun Asia Entertainment owners Shariq Hamid and John Hamid thanked the touring artists and expressed their gratitude to attendees of the event.

They said that whenever Atif Aslam comes to town, his show is always a sold out show. They said this show kept the tradition and they are thankful to the DFW audience for their attendance.