LOS ANGELES: In 2013, Oculus VR’s booth at Electronic Entertainment Expo, the gaming industry’s biggest annual convention, was relegated to a far corner of the show floor near the restrooms. 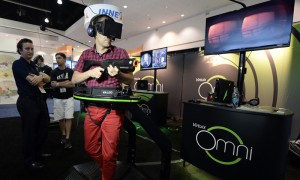 What a difference a year makes. At the 2014 expo this week, the startup, which Facebook bought in March for $2 billion, drew crowds of oglers for its latest virtual reality headset, Oculus Rift.

The change is a sign of the rising interest in virtual reality platforms among publishers and developers, who hope the years-old technology – which creates a 360-degree view that immerses players in fantasy settings – can finally become a viable platform to reverse shrinking video game industry revenues and draw a new generation of users.

Whether gamers will buy into that remains to be seen, but Facebook’s big bet has jolted gaming companies into action.

At the expo, known as E3, Sony let gamers try out its virtual reality headset, Project Morpheus, and teased them with experiences such as zipping down a highway on a luge. Electronic Arts has dedicated research teams to explore virtual reality, even beyond headsets. Yves Guillemot, chief executive of French video game publisher Ubisoft, told Reuters his company is working on a virtual reality experience that’s “coming soon.”

The chief executive of Oculus, Brendan Iribe, has gone on a hiring spree for engineers, designers and developers to fine-tune the technology, develop games in-house, and convince others to make VR-content.

“It’s just the beginning. We’re all learning and making a lot of mistakes along the way,” Iribe said at the expo.

Some developers say the Rift headset has undergone improvements in display technology in the past six months and is inching closer to overcoming perennial obstacles to mainstream adoption: nausea-inducing motion-blur, uncomfortably grainy displays and sheer bulk.

Technology companies struggle to entice developers to create content to drive a new platform. Developers tend to balk if the technology is untested.

“It’s a vicious cycle that’s hard to break unless someone spends a lot of money on a lot of content,” Wedbush Securities analyst Michael Pachter said. “I would bet on Oculus because Facebook’s got the money.”

Consulting firm KZero Worldswide projects revenue from virtual reality hardware and software of $90 million in 2014, and over $2 billion in 2015. Others urge caution.

“I have a belief in VR but I’m not 100 percent sold that we are ready today,” said Electronic Arts CEO Andrew Wilson.

Still, initial consumer interest is high. Hundreds of gamers lined up at E3 to the Oculus Rift, squirming and screeching along to Sega’s horror sci-fi game “Alien:Isolation.”

“It was definitely a cool technology, but it was a little bit disorienting at first,” said California gamer and programmer Michael de la Pena. “I’m a little bit sensitive to motion.”