Conflict in places like Syria and Afghanistan raised the total number of refugees and internally displaced people worldwide to a record 65.3 million

The number of people displaced worldwide has hit a new record, with 65.3 million people forced from their home in  2015 – the highest number since the Second World War.

In its annual report to mark World Refugee Day, the UN said it was the first time the number of refugees worldwide had passed the 60 million mark.

The previous year, 2014, had already seen the highest number of refugees worldwide since World War II, with 60 million displaced people. But last year — when Europe staggered under the arrival of large numbers of migrants — topped that record by nearly 10 percent, the UNHCR said Monday in unveiling its annual Global Trends Report.

The issue of migrants has dominated European news in 2015, but the report shows “that the majority of refugees worldwide is elsewhere”, in countries close to the conflict zones. 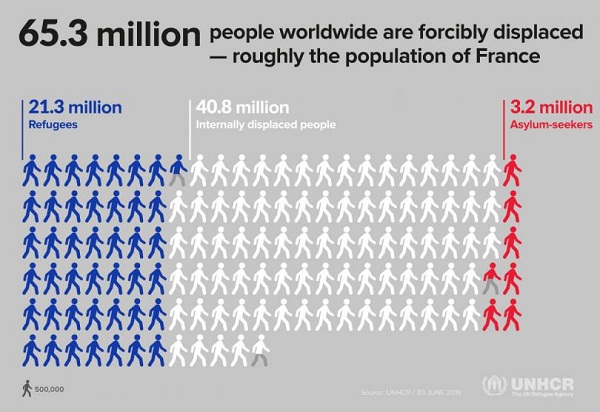 U.N. Refugee Agency, UNHCR, has urged world leaders to do more to end the wars that are fanning the exodus of people from their homelands.

“I hope that the message carried by those forcibly displaced reaches the leaderships: We need action, political action, to stop conflicts,” said Filippo Grandi, the U.N. High Commissioner for Refugees. “The message that they have carried is: ‘If you don’t solve problems, problems will come to you.”

Grandi decried the actions of some European countries for installing physical barriers like border fences and passing legislative restrictions which limited refugee access to richer, more peaceful European nations. But such policies in Europe were “spreading a negative example around the world”, he said.

“There is no plan B for Europe in the long run,” Grandi said. “Europe will continue to receive people seeking asylum. Their numbers may vary … but it is inevitable.” “Everybody has to share responsibility now,” he urged.

A human being out of 113 is a refugee

According to the annual statistical report of the UNHCR, this is the first time since the creation of the UNHCR in 1950, the threshold of 60 million refugees and displaced persons in the world has been exceeded. That’s more than the population of the UK. This number is much higher than the figure for 2014 (59.5 million). 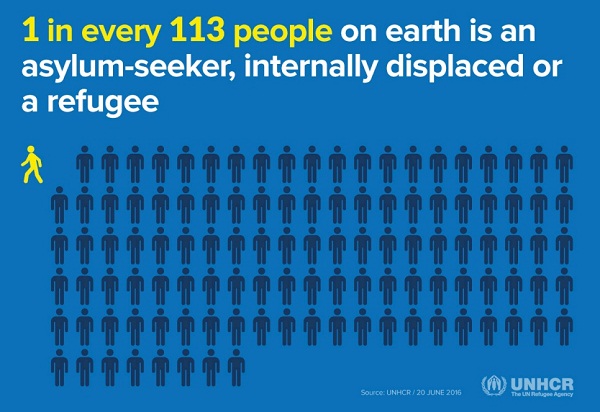 The rate of displacement was provided in stark detail. The UN said that 24 people worldwide were displaced from their homes every minute of every day in 2015, or around 34,000 people per day. In 2005, it was six people per minute.

With 24 people being displaced every minute and the threshold of 60 million crossed for the first time, the number of forcibly displaced people across the world is now greater than the entire population of the UK.

“If these 65.3 million persons were a nation, they would make up the 21st largest in the world,” the U.N. report said. That’s a 55 percent rise in just four years, largely driven by the conflicts in Syria and Afghanistan. 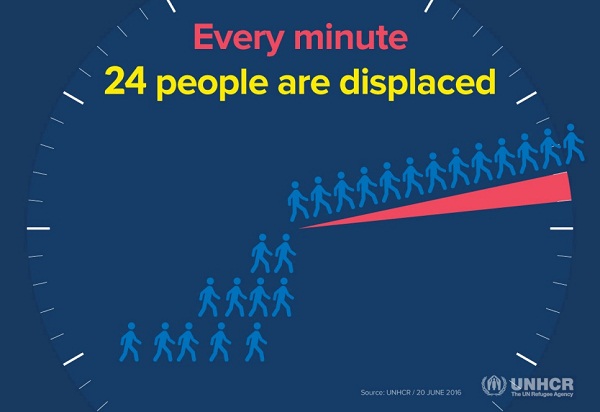