The European Southern Observatory’s Very Large Telescope has captured a spectacular image of a planetary nebula aligned with a star in such a way that it looks like a diamond engagement ring. 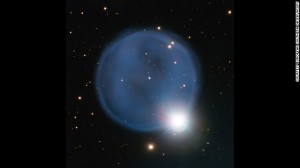 Abell 33 came from a star that’s going to become a white dwarf, which is one way that a star can evolve at the end of its life. White dwarfs are small, dense and hot, and they cool down over billions of years.

The star entering this last phase of its life blows off its atmosphere into space. This results in glowing gas clouds known as planetary nebulae, such as this one that looks like a round bubble or ring.

In the image, the original star appears in the center of the blue bubble. It is more luminous than our sun, and its ultraviolet radiation gives a glow to the ring of atmosphere that has been cast out. Scientists are not yet sure if it’s actually a double star or just a chance alignment in the image.

As for the “diamond” in this image, it’s a different star called HD 83535, which happened to align with the nebula in this image.

Abell 33 is about 2,500 light-years away, so no one will be coming near it anytime soon.

It’s as if the universe liked the star and put a ring on it.