At least three killed and 300 injured as anti-government protesters clash with police near PM’s residence in Islamabad.

Islamabad – At least thirteen people have killed and more than 500 others have been injured as police clashed with thousands of anti-government protesters in the Pakistani capital, as the country’s political crisis turned violent outside the Prime Minister’s official residence. 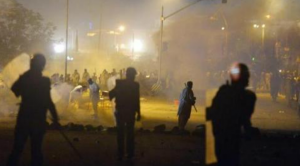 By Sunday morning sporadic clashes were continuing between police in riot gear and a few hundred protesters, as thousands more lay on the grass and slept.

The clashes broke out on Saturday night after thousands of supporters of opposition leaders Tahir-ul-Qadri and Imran Khan attempted to remove a barricade as they approached the PM’s residence.

Police fired rubber bullets and tear gas at the protesters, some of whom fought back with wooden batons, while others threw stones and the occasional firebomb in the heart of Islamabad’s high-security “red zone”.

By 3:00am local time on Sunday morning (22:00 GMT on Saturday), protesters had used vehicles to break down the boundary fence around the National Assembly and were occupying the building’s grounds.

“We left to occupy the area outside the PM house in a peaceful way,” said Muhammad Imran, 25, a Qadri supporter who suffered five rubber bullet wounds. “The police came and fired directly on us and on others in the crowd.”

At least 25 police personnel were also injured in the clashes.

“When we fired tear gas to disperse them, they started throwing rocks at us,” said Shakeel Ahmed, a 45-year-old police officer whose leg was injured by a thrown rock. “It was so intense that I had to run away.”

Supporters of Khan and Qadri have been holding a sit-in near the parliament since August 14 call for the resignation of the prime minister, Nawaz Sharif over alleged vote rigging.

Earlier on Friday, talks between government negotiators and teams from both Khan’s Pakistan Tehreek-e-Insaf (PTI) and Qadri’s Pakistan Awami Tehreek (PAT) broke down, as several earlier rounds had.

On Thursday the military, which has ruled the country for roughly half of its 67 years of independence, stepped into the crisis, assuming a “mediation role” between the protesters and government

Qadri, meanwhile, wants a “national government” of technocrats and bureaucrats, who would then draft a new constitution and system of governance for the country.

“There is no question of resignation by Nawaz Sharif, nor any member from the government,” read a statement released by the PM’s office earlier on Saturday.

Sharif is not present at the official residence in Islamabad, preferring to stay at his home in Lahore, where he normally resides.

In the wake of Saturday’s violence, the government maintained its defiant tone.

“The government will protect the buildings of state institutions. We will not negotiate with a gun to our head,” said Khwaja Asif, the country’s defense minister and a senior PML-N figure, while speaking to local media.

Shortly after the violence began, Khan, who remained at the protest site, called on his supporters to continue their move towards the PM’s residence.

Speaking to Tribune International from inside his vehicle at the protest site, Qadri confirmed that “negotiations are over”.

“That’s why we decided to move towards the PM house and do a sit-in and then you can see how they rained down rubber bullets and tear gas on us.”

A security source, meanwhile, confirmed to Tribune International that the army had been deployed to protect certain government buildings, but that they were not currently engaging protesters.