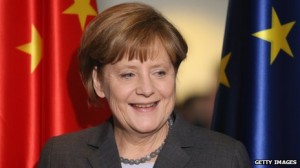 At the moment, the country is one of seven in the 28-nation EU without a minimum wage level.

Germany has relied on trade unions and business groups to fix pay instead.

Mrs Merkel’s conservative Christian Democrats approved the change as part of a power-sharing deal with the Social Democrats (SPD).

The SPD was in favour of the move, but the conservative CDU and CSU parties had been keen to keep the status quo.

Parliament is expected to debate the proposal this summer. It will then move to the upper house for approval in September.

The SPD’s labour market policy spokesperson, Katja Mast, said: “Labour has got its dignity back with a fair payment of 8.50 euros, whether in the East or West and with no industry exceptions.”

But the wage does not cover minors, interns, trainees or long-term unemployed people for their first six months at work.

Some employers, such as those using temporary or seasonal, workers, will have two years to phase in the new minimum wage.

For the rest of Germany’s employers, the regulations will come into effect on 1 January 2015. The wage will be reviewed annually from 1 January 2018.