The deployment of US Special Operations forces is a growing form of overseas power projection.

They operate in the green glow of night vision in Southwest Asia and stalk through the jungles of South America. They 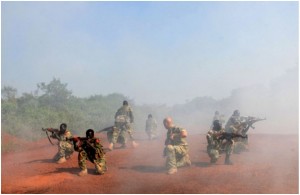 snatch men from their homes in the Maghreb and shoot it out with heavily armed militants in the Horn of Africa. They feel the salty spray while skimming over the tops of waves from the turquoise Caribbean to the deep blue Pacific. They conduct missions in the oppressive heat of Middle Eastern deserts and the deep freeze of Scandinavia. All over the planet, the Obama administration is waging a secret war whose full extent has never been fully revealed—until now.

Since September 11, 2001, US Special Operations forces have grown in every conceivable way, from their numbers to their budget. Most telling, however, has been the exponential rise in special ops deployments globally. This presence—now, in nearly 70 percent of the world’s nations—provides new evidence of the size and scope of a secret war being waged from Latin America to the backlands of Afghanistan, from training missions with African allies to information operations launched in cyberspace.

In the waning days of the Bush presidency, Special Operations forces were reportedly deployed in about sixty countries around the world. By 2010, that number had swelled to seventy-five, according to Karen DeYoung and Greg Jaffe of The Washington Post. In 2011, Special Operations Command (SOCOM) spokesman Colonel Tim Nye told TomDispatch that the total would reach 120. Today, that figure has risen higher still.

In 2013, elite US forces were deployed in 134 countries around the globe, according to Major Matthew Robert Bockholt of SOCOM Public Affairs. This 123 percent increase during the Obama years demonstrates how, in addition to conventional wars and a CIA drone campaign, public diplomacy and extensive electronic spying, the US has engaged in still another significant and growing form of overseas power projection. Conducted largely in the shadows by America’s most elite troops, the vast majority of these missions take place far from prying eyes, media scrutiny, or any type of outside oversight, increasing the chances of unforeseen blowback and catastrophic consequences.

A recent investigation by TomDispatch, using open source government documents and news releases as well as press reports, found evidence that US Special Operations forces were deployed in or involved with the militaries of 106 nations around the world in 2012–13. For more than a month during the preparation of that article, however, SOCOM failed to provide accurate statistics on the total number of countries to which special operators—Green Berets and Rangers, Navy SEALs and Delta Force commandos, specialized helicopter crews, boat teams and civil affairs personnel—were deployed. “We don’t just keep it on hand,” SOCOM’s Bockholt explained in a telephone interview once the article had been filed. “We have to go searching through stuff. It takes a long time to do that.” Hours later, just prior to publication, he provided an answer to a question I first asked in November of last year. “SOF [Special Operations forces] were deployed to 134 countries” during fiscal year 2013, Bockholt explained in an email.

Last year, Special Operations Command chief Admiral William McRaven explained his vision for special ops globalization. In a statement to the House Armed Services Committee, he said, “USSOCOM is enhancing its global network of SOF to support our interagency and international partners in order to gain expanded situational awareness of emerging threats and opportunities. The network enables small, persistent presence in critical locations, and facilitates engagement where necessary or appropriate…”

While that “presence” may be small, the reach and influence of those Special Operations forces are another matter. The 12 percent jump in national deployments—from 120 to 134—during McRaven’s tenure reflects his desire to put boots on the ground just about everywhere on Earth. SOCOM will not name the nations involved, citing host nation sensitivities and the safety of American personnel, but the deployments we do know about shed at least some light on the full range of missions being carried out by America’s secret military.

Last April and May, for instance, Special Ops personnel took part in training exercises in Djibouti, Malawi and the Seychelles Islands in the Indian Ocean. In June, US Navy SEALs joined Iraqi, Jordanian, Lebanese and other allied Mideast forces for irregular warfare simulations in Aqaba, Jordan. The next month, Green Berets traveled to Trinidad and Tobago to carry out small unit tactical exercises with local forces. In August, Green Berets conducted explosives training with Honduran sailors. In September, according to media reports, US Special Operations forces joined elite troops from the ten member countries of the Association of Southeast Asian Nations—Indonesia, Malaysia, the Philippines, Singapore, Thailand, Brunei, Vietnam, Laos, Myanmar (Burma) and Cambodia—as well as their counterparts from Australia, New Zealand, Japan, South Korea, China, India and Russia for a US-Indonesian joint-funded counterterrorism exercise held at a training center in Sentul, West Java.

In October, elite US troops carried out commando raids in Libya and Somalia, kidnapping a terror suspect in the former nation while SEALs killed at least one militant in the latter before being driven off under fire. In November, Special Ops troops conducted humanitarian operations in the Philippines to aid survivors of Typhoon Haiyan. The next month, members of the 352nd Special Operations Group conducted a training exercise involving approximately 130 airmen and six aircraft at an airbase in England and Navy SEALs were wounded while undertaking an evacuation mission in South Sudan. Green Berets then rang in the new year with a January 1st combat mission alongside elite Afghan troops in Bahlozi village in Kandahar province.

Deployments in 134 countries, however, turn out not to be expansive enough for SOCOM. In November 2013, the command announced that it was seeking to identify industry partners who could, under SOCOM’s Trans Regional Web Initiative, potentially “develop new websites tailored to foreign audiences.” These would join an existing global network of ten propaganda websites, run by various combatant commands and made to look like legitimate news outlets, including CentralAsiaOnline.com, Sabahi which targets the Horn of Africa; an effort aimed at the Middle East known as Al-Shorfa.com; and another targeting Latin America called Infosurhoy.com.

SOCOM’s push into cyberspace is mirrored by a concerted effort of the command to embed itself ever more deeply inside the Beltway. “I have folks in every agency here in Washington, DC—from the CIA, to the FBI, to the National Security Agency, to the National Geospatial Agency, to the Defense Intelligence Agency,” SOCOM chief Admiral McRaven said during a panel discussion at Washington’s Wilson Center last year. Speaking at the Ronald Reagan Library in November, he put the number of departments and agencies where SOCOM is now entrenched at thirty-eight.

Although elected in 2008 by many who saw him as an antiwar candidate, President Obama has proved to be a decidedly hawkish commander-in-chief whose policies have already produced notable instances of what in CIA trade-speak has long been called blowback. While the Obama administration oversaw a US withdrawal from Iraq (negotiated by his predecessor), as well as a drawdown of US forces in Afghanistan (after a major military surge in that country), the president has presided over a ramping up of the US military presence in Africa, a reinvigoration of efforts in Latin America, and tough talk about a rebalancing or “pivot to Asia” (even if it has amounted to little as of yet).

The White House has also overseen an exponential expansion of America’s drone war. While President Bush launched fifty-one such strikes, President Obama has presided over 330, according to research by the London-based Bureau of Investigative Journalism. Last year, alone, the US also engaged in combat operations in Afghanistan, Libya, Pakistan, Somalia, and Yemen. Recent revelations from National Security Agency whistleblower Edward Snowden have demonstrated the tremendous breadth and global reach of US electronic surveillance during the Obama years. And deep in the shadows, Special Operations forces are now annually deployed to more than double the number of nations as at the end of Bush’s tenure.

In recent years, however, the unintended consequences of US military operations have helped to sow outrage and discontent, setting whole regions aflame. More than ten years after America’s “mission accomplished” moment, seven years after its much vaunted surge, the Iraq that America helped make is in flames. A country with no Al Qaeda presence before the US invasion and a government opposed to America’s enemies in Tehran now has a central government aligned with Iran and two cities flying Al Qaeda flags.

A more recent US military intervention to aid the ouster of Libyan dictator Muammar Qaddafi helped send neighboring Mali, a US-supported bulwark against regional terrorism, into a downward spiral, saw a coup there carried out by a US-trained officer, ultimately led to a bloody terror attack on an Algerian gas plant, and helped to unleash nothing short of a terror diaspora in the region.

And today South Sudan—a nation the US shepherded into being, has supported economically and militarily (despite its reliance on child soldiers), and has used as a hush-hush base for Special Operations forces—is being torn apart by violence and sliding toward civil war.

The Obama presidency has seen the US military’s elite tactical forces increasingly used in an attempt to achieve strategic goals. But with Special Operations missions kept under tight wraps, Americans have little understanding of where their troops are deployed, what exactly they are doing, or what the consequences might be down the road. As retired Army Colonel Andrew Bacevich, professor of history and international relations at Boston University, has noted, the utilization of Special Operations forces during the Obama years has decreased military accountability, strengthened the “imperial presidency,” and set the stage for a war without end. “In short,” he wrote at TomDispatch, “handing war to the special operators severs an already too tenuous link between war and politics; it becomes war for its own sake.”

Secret ops by secret forces have a nasty tendency to produce unintended, unforeseen, and completely disastrous consequences. New Yorkers will remember well the end result of clandestine US support for Islamic militants against the Soviet Union in Afghanistan during the 1980s: 9/11. Strangely enough, those at the other primary attack site that day, the Pentagon, seem not to have learned the obvious lessons from this lethal blowback. Even today in Afghanistan and Pakistan, more than twelve years after the US invaded the former and almost ten years after it began conducting covert attacks in the latter, the US is still dealing with that Cold War–era fallout: with, for instance, CIA drones conducting missile strikes against an organization (the Haqqani network) that, in the 1980s, the Agency supplied with missiles.

Without a clear picture of where the military’s covert forces are operating and what they are doing, Americans may not even recognize the consequences of and blowback from our expanding secret wars as they wash over the world. But if history is any guide, they will be felt—from Southwest Asia to the Mahgreb, the Middle East to Central Africa and, perhaps eventually, in the United States as well.

In his blueprint for the future, SOCOM 2020, Admiral McRaven has touted the globalization of US special ops as a means to “project power, promote stability, and prevent conflict.” Last year, SOCOM may have done just the opposite in 134 places.