MORE than 160 Palestinians and 5 Israelis are dead, and as the smoke clears over Gaza, the Israelis will not be more secure and Palestinians’ hopes for self-determination remain dashed. It is time for a significant re-evaluation of the American policies that have contributed to this morass. 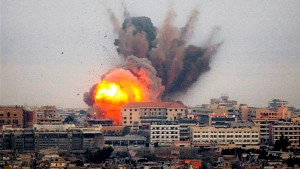 The failure of America’s approach toward the Israelis and the Palestinians, much like its flawed policies toward the region in general, is founded on the assumption that American hard power, through support for Israel and other Middle Eastern governments, can keep the legitimate grievances of the people under wraps.

But events in Gaza, like those in Egypt and elsewhere, have proved once again that the use of force is incapable of providing security for Israel, when the underlying causes of a people’s discontent go unaddressed.

The United States government must ask: what message do America’s policies send to Israelis and Palestinians?

Washington’s policies have sent counterproductive messages to the Palestinians that have only increased the incentives for using violence.

American policy initially signalled to Mahmoud Abbas’s Fatah, a Palestinian party committed to the idea of negotiations, that talks would yield a Palestinian state on 22 percent of the territory between the Jordan River and the Mediterranean Sea. At the same time the United States, which has monopolized the role of mediator for itself, failed to do anything to change Israel’s policies of settlement expansion in the West Bank.

Palestinians’ patience grew thin as the number of Israeli settlers tripled between the beginning of the “peace process” in 1991 and today.

Palestinians learned that the message they initially got about a peace process’ leading to statehood was either made in bad faith or an outright lie.

The message they ultimately understood from observing America’s reflexively pro-Israel policy was that the peace process was merely a cover for endless Israeli colonialism.

America’s policy toward Hamas also sent the wrong message; rather than promoting peace, it only created incentives for the use of arms.

Sanctions imposed after Hamas’s 2006 electoral victory told the party that Israel and the United States would marginalize it unless it accepted the same principles put forth by the so-called quartet of Middle East peacemakers that Fatah accepted — namely, recognizing Israel’s right to exist and renouncing violence. Having seen what that path yielded for Fatah — nothing but continued Israeli colonization — Hamas was not persuaded and chose instead to reject those principles. In return, the Gaza Strip was put under a brutal siege.

Hamas has used armed struggle to achieve certain objectives, albeit at significant cost. Its leaders saw the removal of Israeli settlers from Gaza in 2005 as a victory for their methods, as well as the return of thousands of prisoners last year, in exchange for a single captured Israeli soldier. The returns may be limited and the costs significant, but when the other options are either subjugation or the path their compatriots in Fatah face, Hamas is likely to make the same calculation — and choose violence every time.

The cease-fire announced Wednesday will only perpetuate the same incentive structure. Through the use of force, Hamas gained favourable terms. The Israelis agreed to ease collective punishment of Palestinians in Gaza and end extrajudicial assassinations. While both of these are against international law to begin with and long-term Israeli adherence to these terms is not guaranteed, these are nonetheless commitments that Hamas believes could only have been extracted through armed struggle.

Further, the fighting brought attention to the open wound of Gaza, which the world had forgotten. Foreign ministers and dignitaries visited the strip and Secretary of State Hillary Rodham Clinton flew to the region for the cease-fire announcement. The real danger is if the underlying causes of discontent in Gaza — the denial of human rights and dignity for Palestinians — continue to go ignored once rockets stop targeting Israel. This has been the case each time in the past.

What message is sent to Palestinians when the only time we pay attention to their plight, and the only time they make gains, is through the use of arms?

Likewise, our policy toward Israel has also sent counterproductive messages. As the Fatah-dominated Palestinian Authority came into the West Bank, many of the costs of being responsible for occupied Palestinians were transferred from Israel to the authority while the entrenchment of occupation continued unabated. This not only reduced the costs of occupation for Israel; it continues to be rewarding as Israel has been able to reap political and economic benefits from exploiting Palestinian land and natural resources.

Moreover, Washington has economically, diplomatically and militarily supported Israel as it continues with its settlement project and thus it is no wonder that some in Israel continue to believe that perpetual occupation, or de facto apartheid, is a viable policy option.

By constantly condemning Palestinian armed resistance, and failing to condemn Israeli settlement expansion and repression of nonviolent Palestinian dissent, the message the United States is sending the Palestinian people is this: All resistance to occupation is illegitimate. No nation on earth would accept that, nor is it realistic to expect it to.

The disastrous results of the incentive structure we’ve created have been on full display in recent days. Moving forward, Washington must fundamentally re-evaluate the messages it sends to all parties because we’ve currently set them on the path to even greater — and potentially unmanageable — escalations in the future. (By Yousef Munayyer, who is Yousef Munayyer is executive director of the Jerusalem Fund)